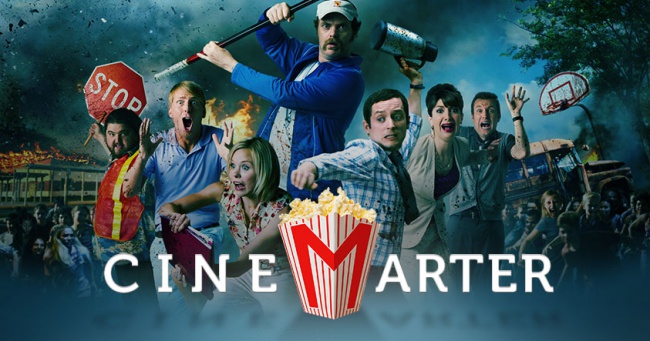 It might seem a little strange that it's taken until 2015 for us to finally have a movie about cooties - the fictional childhood illness that you "get" from members of the opposite sex - but there you have it. Now we do have one, appropriately titled "Cooties," although it has decided to take schoolyard sickness, make it a reality, and turn its victims into savage cannibals. Oh, and keeping with the spirit of its real-life "inspiration," the only people who are affected by it are those who haven't gone through puberty. What we have on our hands, folks, is a killer children movie - and maybe a zombie movie, if you want to call its antagonists "zombies." See, it's scary because kids are already creepy and evil, and now they're also cannibals. There are worse horror movie premises.

The film begins with a montage in which we see a chicken nugget being created - probably the grossest part of the movie; just try eating your McNugget while watching Cooties - but with one crucial difference: it's infected with some black goop. A child eats it, and soon after she bites another one in the face. He spreads the virus to a whole host of other children, and soon enough the entire school is infected. Our protagonists are a bunch of teachers, each of whom is cartoonishly depicted. The "lead" is a writer, Clint (Elijah Wood), who is at the school only because he's acting as a substitute for someone else. 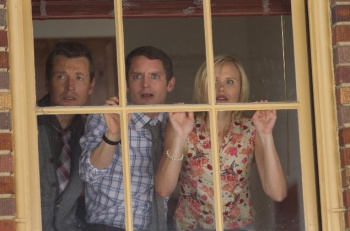 You may or may not care about the other teachers, in large part because they're all one-note stereotypes. Lucy (Alison Pill) is the "nice one," who conveniently happens to know Clint from when they went to school together; Wade (Rainn Wilson) is the jock gym teacher and Lucy's boyfriend; Tracy (Jack McBrayer) may or may not be homosexual - yes, that's his one character trait; Rebekkah (Nasim Pedrad) is paranoid; and Doug (Leigh Whannell, also a co-writer) is a creepy sex education teacher. They have to figure out how to survive the attack by their students, and maybe try to make it to safety, too.

Cooties is a horror-comedy, which you may have guessed just by looking at its title and realizing that the filmmakers made a movie about cooties. It starts off quite funny, actually; for its first 20 minutes or so, it looks like it's going to be a smart satire of both outbreak movies and killer children movies. It isn't taking itself particularly seriously, and it has several witty lines. Unfortunately, it doesn't stay like this throughout. By the time limbs are flying, it gets too serious, too stock, and even the gleeful murder of children who were obnoxious before and bloodthirsty now can't save the film from being anything more than a passable distraction.