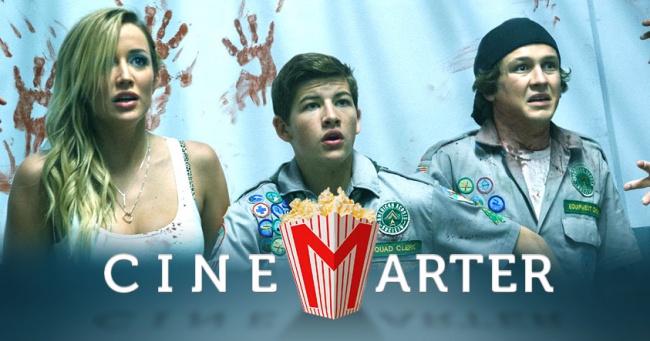 One would hope that a film with a title like Scouts Guide to the Zombie Apocalypse would be a lot more fun than the movie we wound up getting. Completely devoid of laughs, compelling characters, scares, memorable action, ideas, or fun, this is one of the blandest movies that will be released to multiplexes this year - or any year - that contains such a silly title.

Maybe it's the fault of the zombies, who nowadays are so difficult to make engaging or fun. We've seen so many zombie movies, particularly in the last decade, that we're suffering from oversaturation. The movies need to do something extra to get us to become invested, since to us it feels like we've seen this same film over and over again. Even Cooties, which was just a generic zombie movie, had a killer hook. Scouts Guide to the Zombie Apocalypse's hook is that the heroes are all nerdy boy scouts, but in reality this premise is barely used, leading to the result being nothing we haven't seen before. 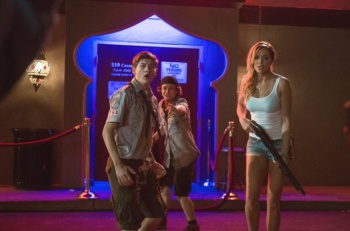 Our leads are the three remaining boy scouts in America, I presume. Ben (Tye Sheridan) is the only one with any character arc to speak of, so he's the de facto lead. He is in love with the sister (Halston Sage) of his best friend, Carter (Logan Miller), who hates being in the scouts - his sole defining characteristic. Both of them want to leave but have stayed around because their friend Augie (Joey Morgan) is still infatuated with the group. One night, when Augie is going to be awarded a prestigious badge, the scouts discover that almost everyone in their town has become a zombie. They're also joined by a cocktail waitress of the local strip club, Denise (Sarah Dumont), who can certainly handle herself in a fight and is the closest Scouts Guide to the Zombie Apocalypse comes to having an interesting character.

It's at this point when the movie has a choice. Does it want its characters to turn into unlikely action heroes and slaughter some zombie tail? Or does it want to take a more "realistic" approach and have them simply try to survive for an hour? Unfortunately for the audience, Scouts Guide to the Zombie Apocalypse takes the latter approach - until a scene very close to the end - and, as a result, becomes just a generic zombie movie. The scouts try to survive and escape, all while finding zombies around every corner.