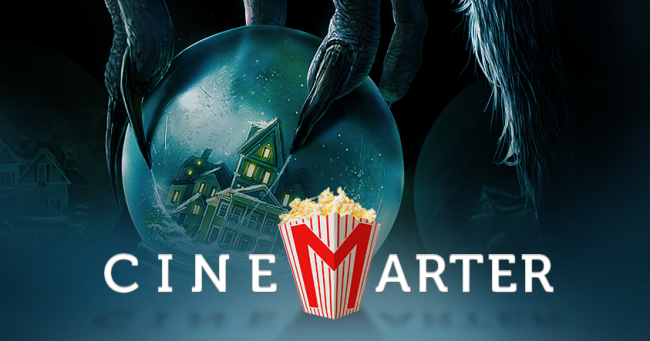 Christmas movies come in all shapes and sizes, but likely the least frequent type we see is the Christmas horror movie. Why is that? Probably because both of those types of genres seem to be at opposite ends of the spectrum. Christmas movies are here to make you feel warm and gooey while horror movies should, ideally, frighten you. While some certainly exist - Black Christmas, Gremlins, the Silent Night, Deadly Night franchise - they're a rarity compared to the more traditional Christmas movies. Well, this year we have a theatrical Christmas horror movie called Krampus, which is far better than you might expect. I know; I'm shocked, too.

The set-up is essentially a supernatural home invasion flick, but over Christmas and with "Saint Nicholas' shadow" as the villain. A large extended family gets together a couple of days before the big day, but problems ensue the moment they meet up. Nobody seems to like one another - the adults are constantly making snide comments, and the kids are fighting - and the Christmas Spirit seems to be ruined. It's gotten so bad that one of the youngest children, Max (Emjay Anthony), rips up his annual letter to Santa Claus. It's at this point that a terrible blizzard rolls into town, killing the electricity, radios, cell phone service, and essentially isolating the family from the rest of the world.

At this point, you're probably guessing that the family will band together, learn to appreciate what one another has to offer, and they'll be able to fight off the bad guys. Well, you're in for a treat. Krampus is too good for that. While we do get some familial bonding, it doesn't necessarily save these people - and that's a good thing. Most of these people are pretty despicable, and the film only rarely actually tries to make us root for them. It knows we're watching to see Krampus irreversibly muck up their lives, and that's exactly what it's going to deliver. 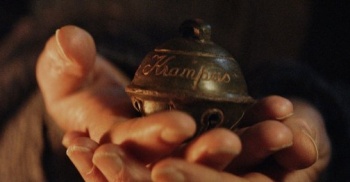 Well, that, and one of the most insane sequences you'll see all year, one in which various toys come to life and wage an all-out assault on the family. You get to see a giant jack-in-the-box clown, a demented teddy bear, an evil porcelain owl doll, a very stab-happy robot, laughing gingerbread men with a nail gun - and we haven't even gotten to the elves or Krampus itself yet. The second half of Krampus features some pretty wonderful imagery, and it toes the line between being a serious and atmospheric home invasion movie and an over-the-top, campy one. It works. It's the same type of tone that director Michael Dougherty instilled in his last horror movie, Trick 'r Treat.

In addition to that fantastic - and very trippy - sequence of events, the film's sole moment of exposition distracts us from how expositionary it is by acting like an animated short film - one that changes things up and is pretty interesting in its own right. Krampus throws in little touches like this every now and then, ensuring that we don't get bored. It even does this with its conclusion, which was so close to being an eye-rollingly cliched Hollywood ending - more than once, actually - but subverts it every time. This was a make-or-break moment for me, and while there was still a better way for the film to end - it fades out earlier and should have concluded there instead; you'll know it when you see it - this was more than satisfactory.