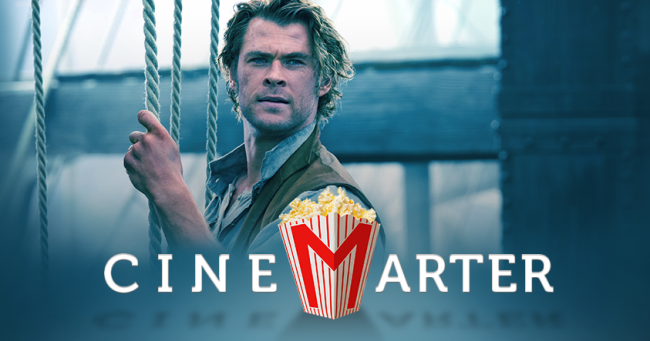 Split into two parts - one far more enjoyable than the other - and more focused on spectacle and special effects than plot or characters, In the Heart of the Sea is a movie we probably didn't need, but isn't one that I'm unhappy we have. It's almost exactly what you expect from it given the talent involved, it does, indeed, feature a giant man-hating whale, and the good Hemsworth brother continues a slew of good performances in the lead - although not technically the protagonist - role. Director Ron Howard can make anything exciting and, for the most part, he delivers with this project.

However, that does not mean the film is without issues. First and foremost, the way that the film has framed keeps it from being anywhere close to immersive. It's been billed as the "true story of Moby-Dick," and as such its protagonist is actually writer Herman Melville (Ben Whishaw), who would eventually go on to write "that whale book" you read back in middle school. He is interviewing Thomas Nickerson (Brendan Gleeson), a survivor from the ship whom Melville convinces to recount his version of the events that unfolded aboard the Essex.

And it's there where the majority of the story takes place, even if it's all technically in a flashback, and we cut away from most of the story elements by cutting to Melville and Nickerson and then cutting back to the Essex story several weeks or even months later. It's a "greatest hits" compilation of what happened, infinitely more interested in the more action-packed events than in slow character-building moments. The result is a movie that looks great and features more than its fair share of excitement, but will likely leave you emotionally ambivalent. 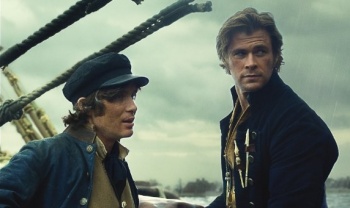 The story of the Essex, in case you aren't aware, follows a group of whalers who venture into nigh-uncharted waters, are attacked by a very large whale, and find themselves packed into tiny boats and forced to make some very difficult choices to survive. The whaling portion serves as the film's first half, while the survival aspect is the second half. The former is something that feels fresh, while the latter feels like every stranded-at-sea movie ever - although I'll admit that there is very little you can do to mix it up, especially with only a PG-13 rating.

Aboard the Essex, though, we get to see the ship's captain, George Pollard, Jr. (Benjamin Walker), have his petty quibbles with the First Mate, Owen Chase (Chris Hemsworth), there's a minor subplot about the alcoholism of the Second Mate (Cillian Murphy), and the one main whaling scene is really quite good. Oh, and future Spider-Man Tom Holland shows up as the younger version of Brendan Gleeson's character. If his performance here is any indication as to what we're going to get with Spider-Man, we're going to be disappointed. There's not a lot to these characters, but there's at least something. Once they're shipwrecked and fighting for survival, there isn't much that the filmmakers can do except show us how awful their situation is.