You can calm down. J.J. Abrams and Disney did not ruin Star Wars. They didn't improve it much, either - although anything's going to be an improvement over the prequel trilogy. Actually, come to think of it, they didn't change much at all. Star Wars: The Force Awakens is pretty much just the original film again, although it's been given a glossier coat of paint and more references to past works than a "career achievement" reel at a big awards show. To ensure that nobody leaves unhappy, the filmmakers have taken the safest direction possible at almost every turn. The result is something that feels incredibly familiar, but also works very well. The tried and true is tried and true for a reason.

I know a lot of people are avoiding spoilers like the bubonic plague, so I won't get into the plot very much. But considering the first four words of the opening crawl are "Luke Skywalker is missing," I feel pretty safe revealing that. Skywalker (portrayed in the original three films by Mark Hamill), is, indeed, missing. The film's plot involves a bunch of people trying to protect a droid with a map to his whereabouts, all while stopping the new bad guys, the First Order, who want the droid and its map because Skywalker is the First Order's biggest opposition even after he goes AWOL. 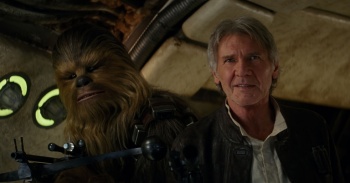 The primary good characters are: Finn (John Boyega), a Stormtrooper who becomes disenchanted with the First Order's practices and abandons them; Rey (Daisy Ridley), a scavenger who meets both Finn and the aforementioned droid and as such becomes tangled up in the whole mess; Poe Dameron (Oscar Isaac), a pilot for the Resistance whom Finn breaks free after he's captured by the First Order; as well as Han Solo (Harrison Ford) and Chewbacca (Peter Mayhew), two smugglers whose identities you should already know. The First Order is represented by Kylo Ren (Adam Driver), a Darth Vader wannabe, and General Hux (Domhnall Gleeson), who runs the main First Order base. Anything more? You're on your own.

Save for a couple of big reveals, and a touch of subversion here or there, we're just doing Star Wars again. I'd like to reiterate that there's nothing inherently wrong with that. The franchise hasn't been good in decades, so going back to the basics isn't a bad way to start - especially since this is the beginning of a planned new trilogy. The story isn't complicated, and it doesn't have to be. The good guys and bad guys are fighting over the fate of the galaxy, and there are key players on each side that can sway the course of the battle. Take out all the oddly named planets and various CGI aliens, and that's what you've got here.