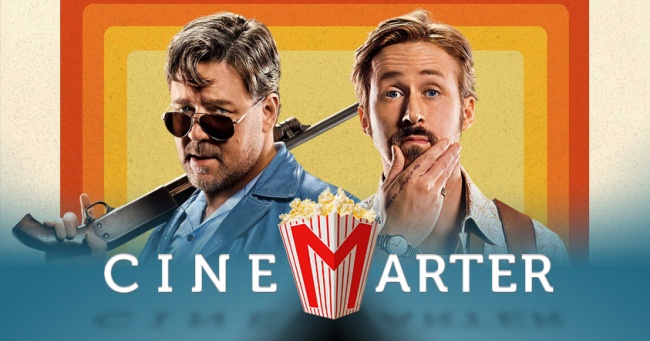 Pornography is a pivotal tool for bringing down corporate corruption. Smoking and hard-drinking make you look awesome. Profanity should be used at every available interval. And killing people can be fun. These are the lessons that one can take from The Nice Guys, a movie so fun and funny and with such a quick pace that it's tempting to simply stay seated after it's over in order to catch the subsequent showing. The film is just under two hours long and yet feels so much shorter, owing much to its stars, dialogue, situations, and constantly different backdrop for the action.

Set in Los Angeles in the 1970s, The Nice Guys is a buddy-detective movie, pairing up two guys with mixed feelings for one another in order to locate someone - only to discover that there's a much larger conspiracy afoot. Detective Holland March (Ryan Gosling) is the chain-smoking, hard-drinking man around whom the entire cinematic world appears to have been built. This is the type of character whom you can watch for hours, because he'll always be doing something funny or interesting - and all the other characters seem to know this and egg him on. His partner, at least for the next couple of in-movie days, is Jackson Healy (Russell Crowe), the man you hire if you need to send a message - kind of like Wade Wilson's pre-Deadpool days. 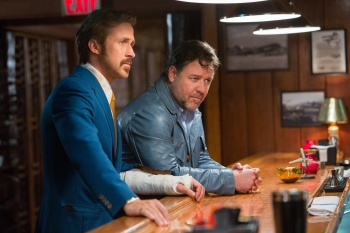 The case? A missing girl. Amelia (Margaret Qualley) has been missing for a couple of days. Everyone seems to want to find her, but for various political reasons. Various individuals show up to try to kill her, they're often foiled by our leads - sometimes inadvertently - and eventually the "real" plot is unveiled. It doesn't contain large surprises, and it doesn't reach particularly high, but there are points to be made, and The Nice Guys ensures that it makes them.

Still, you don't watch The Nice Guys for its plot, even if the one it has will make you think back to detective movies from bygone years. No, the reason you watch The Nice Guys is to see Ryan Gosling and Russell Crowe spar both verbally and physically with each other and the diverse cast of characters they encounter. The two actors have a tremendous rapport with one another, the characters they're playing are well-defined and constantly entertaining, and the dialogue they've been given is some of the funniest you'll see this year. There's also a great deal of physical and situational comedy scattered throughout. It's often black comedy, but it's funny nonetheless.

The Nice Guys is the type of movie that can get one excited about cinema.

Director Shane Black is a man who has been working relatively consistently in Hollywood since the 1980s, but didn't become a "name" until the release of Iron Man 3, which saw a - let's say - "mixed" reaction from fans. But it was several years before the Marvel film that Black made his directorial debut, doing so with the black comedy/noir Kiss Kiss Bang Bang, which is great. In many ways, The Nice Guys feels like a spiritual successor to Kiss Kiss Bang Bang. With twisty detective plots, style to spare, comedy as black as my heart, and a plethora of interesting characters, the films make for a great double feature, and they showcase exactly where Black's directorial strengths lie.

Beyond the two leads, both of whom are tremendous, The Nice Guys has a few other characters that are more than worthy of our attention. The most surprising is Angourie Rice, who plays the daughter of the Ryan Gosling character. Whip-smart and more than able to hold her own, she gets some of the best moments and lines in the film, acts as the leads' conscience, and is one of the few child performances we get in a year that is worthy of praise. Also engaging: Matt Bomer as John Boy, whose role might be considered a spoiler; Margaret Qualley as the missing Amelia, who turns up for a while and is great; Keith David as one of the sub-villains; and Kim Basinger as Amelia's mother, reuniting with L.A. Confidential co-star Russell Crowe.

The Nice Guys is the type of movie that can get one excited about cinema, especially if one happens to frequently be bogged down by the endless stream of urine being given to us by the fat eagle that is Hollywood. This is a fast-paced dark comedy featuring a ton of laughs, great characters and performances, just enough action and violence, and a more than serviceable plot, all wrapped up in a nice bow that keeps you smiling from start to finish. It's hard to ask our movies to be better than The Nice Guys; it's only a shame that a few of them even get close to that level of quality.

Bottom Line: Enjoyable from start to finish, The Nice Guys is a great movie from a very good director.

Recommendation: If you enjoy black comedies or detective movies, you need to see The Nice Guys immediately.