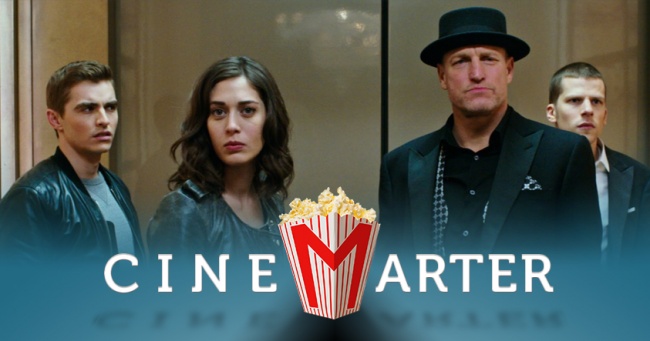 Note: I don't understand why the filmmakers didn't use the title "Now You See Me: Now You Don't" for the sequel.

Now You See Me was the kind of forgettable movie that you walk out of and already begin to forget exactly what happened. It was released three years ago, so can the filmmakers expect anyone to remember what happened? No, they can't. That's why the sequel smartly begins with Morgan Freeman reciting a couple of the key plot points from the original. The rest are espoused by characters later on. This is a good sign. It means the filmmakers recognize the first movie wasn't worth much of anything, and that the sequel only exists because it made a ton of money. It's quiet honesty.

The original Now You See Me was about a bunch of magicians stealing money from some guy (Michael Caine), all while being chased by FBI agent Dylan Rhodes (Mark Ruffalo). Rhodes, we learned at the end, is actually on the magicians' side, because sure, why not? The new film sees the magicians in hiding, then get told to not be in hiding, then they get kidnapped by Harry Potter, then they have to steal something from some guy. They're the heroes because they're stealing from people who are worse. They're the modern-day magician equivalent of Robin Hood. 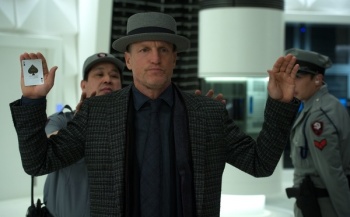 The magicians are referred to as the Four Horsemen, and consist of Danny Atlas (Jesse Eisenberg), Merritt McKinney (Woody Harrelson), Jack Wilder (Dave Franco), and Lula May (Lizzy Caplan). Astute viewers will note that the Isla Fisher character has been replaced by Lizzy Caplan. The film also makes mention of this; she's there to be "the girl." Honesty, right? They're kidnapped by Walter Mabry (Daniel Radcliffe), need to steal a piece of technology, and then the plot collapses upon itself as so many things need to happen in order for them to be called innocent and to bring the real villains to justice.

It's a messy, convoluted plot that only eventually starts to make sense when the characters stop to explain it - and even then, not really. But at least there's an effort here. The last one just saw the magicians on the run from the FBI the whole time; this is a step up from that. There's a bit of character development, there are a few laughs (most of which come from Lizzy Caplan), and the big magic stuff works.

Now You See Me 2 will pass the time, and you probably won't find yourself feeling like you wasted two hours of your life.

If nothing else, Now You See Me 2 succeeds in the "mindless, forgettable entertainment" category. It's never dull, it's always moving, and it will occasionally even dazzle. The scene in which they steal a computer chip attached to a playing card goes on for a little too long, but it's so stylishly done that it's captivating. Does it make no sense? Of course. Could they (apparently) just hypnotize everyone and walk out scot-free? Probably. But that's not fun. And that scene is a whole lot of fun.

The rest of the film isn't boring, either, although nothing within it tops that scene, and by the end it's entirely possible to have had more than enough of the Horsemen and their ploys. The final reveal is perhaps the worst the franchise has had, which makes for a very anticlimactic finish. And while some of the "magic" tricks are explained to us - because the characters don't ever claim to have supernatural powers - some of the more baffling ones don't, probably because they can't.

It's amazing how a cast this talented can look so bored, but nobody in Now You See Me 2 seems to be having much fun - except Lizzy Caplan, who is the comedic relief and therefore has to provide energy. Jesse Eisenberg, Woody Harrelson (in dual roles this time), Mark Ruffalo, Dave Franco, Daniel Radcliffe - among others - don't bring much to the project, except that we remember most of them being in the last film, and therefore we should care about them in this one. Except that none of the characters in the last film mattered, so that doesn't work. There are attempts to develop them this time, but it may be too late.

You should know what you're getting with Now You See Me 2. A couple of fun magic tricks, a preposterous and pretty silly plot, characters who don't really matter, a couple of laughs, and a heist that requires so much convolution to happen that you begin to wonder if there was an easier way. It's never dull, but it's not as fun as one might hope - and you're going to begin forgetting it on the drive home from the theater. Now You See Me 2 will pass the time, and you probably won't find yourself feeling like you wasted two hours of your life. That's fine, I suppose.

Recommendation: With most sequels, if you like the first one, you'll probably like the second. That's true here, and Now You See Me 2 actually improves a little on its predecessor.