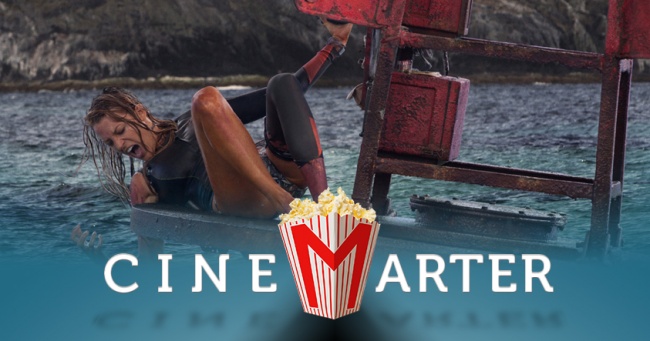 A quick Google search of shark movies quickly leads to the conclusion that there's only been one good one: Jaws. There were some that tried to be good, and then a whole bunch of silly ones, like Sharktopus, but the only success, prior to right here, right now, was Jaws, a film that did it so well that none other could even come close - and didn't need to. However, we can now, tentatively, add a second shark success story onto that list. The Shallows, even with more than a few issues, is a good shark movie.

The premise is simple: Nancy (Blake Lively) has gone to a secluded Mexican beach in order to help herself recover from the loss of her mother, who was ill for quite some time. Her mother previously visited the beach and took some photos, so she sees it as a way to honor her, I guess. However, late in the day, a shark appears, bites her, strands her on a rock, and leaves her fighting for her life. She's losing blood, nobody else is around, her surfboard's gone, and the tide will, eventually, swallow up the rock and leave her completely defenseless. 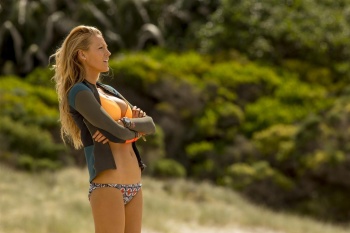 There are worse ideas for a movie. "Here's a woman, here's a shark, here are some obstacles, now have at it." Most of Nancy's attempts to save herself find themselves thwarted for one reason or another, even though she's an intelligent, perseverant person, who is also conveniently a med student. She can fix her shark bite, at least for the time being, but dehydration, starvation, a cold night, and a shark on the prowl could still do her in.

Basically, The Shallows thinks that watching someone struggle for survival on a tiny chunk of rock is thrilling enough, and also there's a shark waiting for our protagonist to slip up, even a little bit, so it can pounce. Any misstep could end her life, and that tension keeps us on edge. It's effective. It's a thriller with a few horror elements thrown in, and it's thrilling and occasionally scary. That's what you want from these things. It's also a little funny, because taking a step back to laugh at an absurd situation is something we all like to think we'd do in similar circumstances.

The Shallows might just be the second best killer shark movie of all time, which admittedly says more about the quality of its competition than it, but is an accomplishment worth celebrating nonetheless.

Director Jaume Collet-Serra also makes the right decision in regards to the shark, in that the more we see it, the less scary it becomes. For the majority of the film, we only see its fin, or a shadowy shape moving in the water; we rarely get full glimpses of the creature. It's only near the conclusion that we see it in its full glory. And while the CGI isn't perfect, it's usually serviceable - but also reinforces why it was a good choice to not showcase it.

A large piece of The Shallows' success is owed to its lead, Blake Lively, who turns in both a strong physical performance as well as a surprisingly good emotional one. If she had phoned it in, it would've been tough to care for her Nancy, but Lively pulls it off. She has to do a lot of swimming and other physical activity, but she also generates pathos for her character. And it is a character - the relationships with her family help make her feel more fleshed out, and her budding friendship with a seagull (seriously) is just the best thing. She even names him "Steven Seagull," and he is the standout character of the film.

It doesn't all work. The finale is a throw-everything-and-hope-something-sticks kind of ending, and it doesn't quite work. Some of the shark CGI isn't great, it suffers from Gravity-like Murphy's Law plotting at times, and it might've been more memorable had it tried to be scarier. It's often nail-biting, but it's only rarely frightening. There are also a few ugly found-footage shots, which is a shame because most of the film is actually quite beautiful. It helps that it's set on this secluded beach, but the filmmakers capture a good number of gorgeous moments.

The Shallows might just be the second best killer shark movie of all time, which admittedly says more about the quality of its competition than it, but is an accomplishment worth celebrating nonetheless. It's a slight but mostly effective thriller about a woman trying to survive a shark attack while stranded on a rock. Blake Lively brings it, the shark's fun, the movie's thrilling, and Steven Seagull needs approximately 30 sequels.

Bottom Line: A tight thriller with a shark antagonist is almost unprecedented, so let's sit back and appreciate The Shallows.