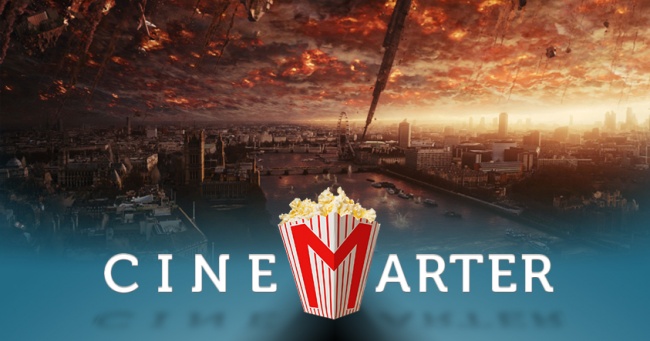 The latest too-late sequel comes in the form of Independence Day: Resurgence, coming 20 years after its predecessor made audiences stand up and yell "we will not go quietly into the night!" I've never been its biggest fan, but it offered some decent action and lots of destroyed landmarks, so it served its purpose as a Roland Emmerich-directed disaster movie. It did not need a sequel, but given how it made over $800 million worldwide, the only real surprise is that it took 20 years to have one made.

In case you aren't in the loop, Independence Day was about an alien invasion, and our attempts to fight them off. We humans were successful and, in the two decades since, we've used their technology to better our planet, and the event rallied us to the point that global war has all but ceased. However, now the aliens are back for round two, so it's up to a large group of people to try to fend them off one more time. This time, though, they've brought a much, much bigger ship. Also: Will Smith isn't back to save us. So, you know, we might be in trouble. 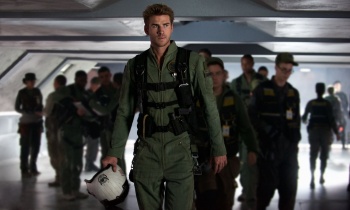 The cast features many returning characters, as well as a few new ones. David Levinson (Jeff Goldblum) helped save the world before, and has spent the last couple of decades studying the alien technology, preparing for their eventual return. Thomas Whitmore (Bill Pullman) was the president at the time, but now is regarded as a little bit crazy. His daughter, Patricia (Maika Monroe), was a fighter pilot, and is dating another one, Jake (Liam Hemsworth). The stepson of the Will Smith character, Dylan (Jessie Usher), is/was friends with both of them. Elizabeth Lanford (Sela Ward) is the new president, Joshua Adams (William Fichtner) is an important General, Dr. Catherine Marceaux (Charlotte Gainsbourg) is a psychologist studying people who encountered the aliens - and you're already overloaded with people, so I'll stop there, even though there are probably another half-dozen to mention.

And it's not like these people are just background fodder for the aliens, either. The first hour of Independence Day: Resurgence is spent getting to know them, often with painstakingly slow exposition. If it's a returning character, most of the conversations go like this: "Hi, [person]. What've you been up to for the last two decades?" If it's a new one, it's the same thing, except we have to explain their relationship to a previous character. It's so utterly boring.

Overstuffed with thin characters, the movie spends the majority of its running time rehashing or referencing the original, and trying to explain aliens.

There isn't anything to them, either, so if you're hoping all this time spent establishing who's who is going to make you care about their fates, you're going to be disappointed. It takes far too long to set the stage, and with this many people, the depth each is permitted is spread paper thin. And because it's so dull, by the time the aliens do show up to wreck our lives, you might already be asleep.

With that said, there are a couple of decent action scenes once we get to that point in the movie. Because of the advanced technology, humans now have planes that look like they're straight out of Star Wars, so there's a big battle in the sky with lasers being shot everywhere, and then we also use the planes to fight the Big Bad at the end. We also have laser guns that make "pew pew" sounds. That's always better than real guns, right?

Mostly, though, this is the same movie as the first one, just with better special effects, more characters, diminished returns, cornier jokes and less enjoyable action. There's almost nothing here that you haven't seen before - there aren't even a whole lot of Emmerich's signature "blowing up Earth" moments - it spends a great deal of time either referencing or rehashing the original, and it's just really dull. Even from a "mindless fun" perspective, you can do a whole lot better than Independence Day: Resurgence. They had 20 years to get this right, and all they did was do a worse version of the original, but with a bigger boss fight. And it took five screenwriters for this? Please.

A snoozefest of a blockbuster, Independence Day: Resurgence is a movie we didn't need and shouldn't have, except that the original made an obscene amount of money, so, of course, it (eventually) got a sequel. Overstuffed with thin characters, the movie spends the majority of its running time rehashing or referencing the original, and trying to explain aliens. Its action is mostly competent, but not exciting. You won't care much about anything that happens, and it even has the gall to sequel-bait at the end. If the aliens did invade, one of your regrets would be watching this movie.

Bottom Line: A boring blockbuster, Independence Day: Resurgence never should have been made.

Recommendation: If you're a fan of the original, just re-watch it. They're basically the same movie, but the original is a lot better.