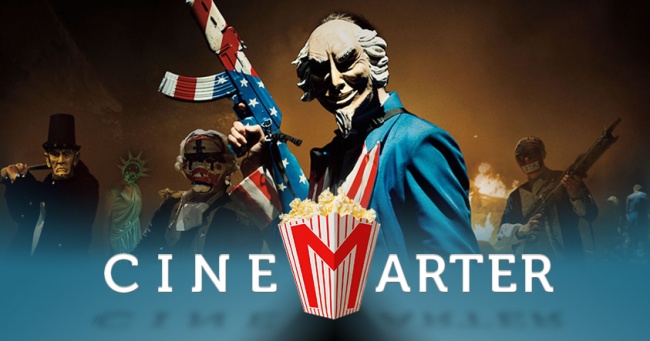 The first Purge movie was one of the most disappointing films of 2013 for me. It had a great premise, but more or less wasted it on a sad excuse of a home invasion movie. But it made so much money that writer/director James DeMonaco was allowed to make a sequel. The Purge: Anarchy, released just a year later, fixed a lot of those problems, actually allowing the audience to explore the social and political ramifications of the titular Purge. Now, with The Purge: Election Year, the filmmakers have decided to use their movie to parallel the actual American election. "Keep America Great." Killer tagline, movie.

For those uninitiated, the Purge is a 12-hour period every year during which time all crime, including murder (it is stressed), is made legal. The idea, the government claims, is that all of the pent-up rage that the citizen would otherwise harbor can be released in one night. In reality, though, the Purge disproportionally targets poor and minority citizens, and acts as a way to artificially control that portion of the population, and keep the rich (and white) in power. 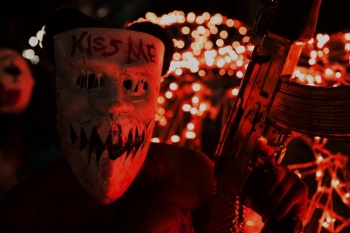 Now, Senator Charlene Roan (Elizabeth Mitchell), wants to eliminate the Purge. She, having witnessed her family fall victim to it, is running a campaign dedicated to putting an end to the practice once and for all. But it's now Purge night, and even government officials aren't immune, so you can probably see where this is going. An assassination attempt leads her and one member of her security team, Leo Barnes (Frank Grillo, returning from the last film), on the street and vulnerable. Will they survive the night?

Maybe a more important question to ask is this: Do we want her to? After all, if she does, and then wins the election, she'll end the Purge. And then we'll have no more movies about it. Movies that, presumably, entertain us. So shouldn't we root against her? Even though that means cheering for the elitist religious zealots trying to keep the Purge as it is? It's kind of a weird position for us to be in. Morally, we know for whom we should root. But this isn't a real universe, and we want bloodshed.

The Purge: Election Year has a message, and it delivers it with the efficiency and subtlety of a jackhammer.

To that end, our protagonists kill enough people to entertain us, even though they're the good guys. Most of the action is too dark to make out exactly what's going on, but there are shootouts and hand-to-hand combat scenes, so most of the bases are covered - nothing happens that tops Anarchy, though. There are a few jump startles, there's lots of running from place to place, our protagonists join up with some of the locals in order to give us a more emotional connection to "the people's" struggles, and it all progresses quickly and efficiently.

Now, don't get me wrong: it's nice to see a movie that actually wants to be about something, especially when that something involves a killer premise and - while an extreme version - draws some parallels to real-life issues. That earns it points, even if it does put the audience in an odd position. And, at least in my case, I did find myself rooting for the Senator. She wants to take away our "fun," but The Purge franchise peaked with its second installment, and it's only moderately enjoyable in the first place. Three chapters is probably enough. There's probably still more to reap from the Purge concept - this one brings up "murder tourism" as a concept, and it makes you wonder what other countries think of this, as just one example - but if this is it, that's fine.

Frank Grillo was amazing in Anarchy, so he returns here, but the act has worn thin. He's singularly focused on protecting the Senator, which means he doesn't trust anything and doesn't listen to anyone else. And even though he takes a bullet in his shoulder early on, and bleeds through his shirt and multiple wrappings, he remains undeterred. He's way too over-the-top and basically Superman at this point; it's boring. Elizabeth Mitchell's Senator is noble but dull. They're joined by Mykelti Williamson, Joseph Julian Soria, Betty Gabriel, and Edwin Hodge, characters who are supposed to make us feel for the plight of the everyday people, but have only a couple of defining characteristics themselves.

The Purge: Election Year has a message, and it delivers it with the efficiency and subtlety of a jackhammer. Its message puts its audience in an awkward position - do we root for the people trying to take away our fun? - but it's the thought that counts. These movies have been mostly mediocre anyway, so it's not too hard to cheer for those in the moral right. There aren't many scares - there are jump startles, and some gory images - the action isn't very good, and the act has started to wear thin.

They do have awesome masks, though.

Bottom Line: Has an important message (which might alienate some of its audience members), but The Purge: Election Year is only moderately entertaining.

Recommendation: It's a lesser version of the last movie, and it's still better than the first one.