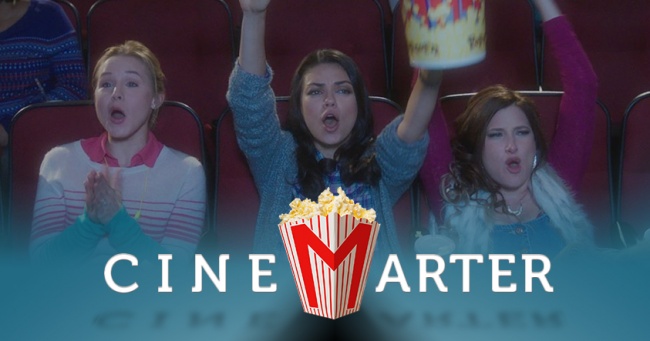 A much better Mother's Day movie than the actual movie titled "Mother's Day," Bad Moms is a comedy that I wish was funnier than it winds up being. There's a lot to like here, particularly when it comes to the cast and the film's primary themes, but so many of the jokes simply don't work, leaving the whole thing feeling like a wasted opportunity. It's not a movie to actively dislike, even if its trailer is cringeworthily bad, but given its potential, it probably should've been better.

Amy Mitchell (Mila Kunis) is an overworked mother of two kids (Oona Laurence and Emjay Anthony) and a layabout husband (David Walton). With all she has on her plate, coupled with the recent revelation that her husband is cheating on her, she decides that being a "good" mom simply isn't worth the effort anymore. She quits. She stops cooking, helping with homework, participating in extra-curricular activities, and so on. She even stops going into her part-time office job. She also befriends Carla (Kathryn Hahn), a single mom who likes to party and Kiki (Kristen Bell), an obedient stay-at-home mother who does everything in the household. The three of them decide to do the bare minimum required of them, and spend the rest of their time enjoying themselves.

Of course, a movie wouldn't work if it was just endless shots of three people having fun, so a plot eventually gets thrown their way. It comes in the form of Amy deciding to run for PTA president against the incumbent, Gwendolyn (Christina Applegate), whose enthusiasm for schooling and control has led to her becoming Amy's enemy. She's the class bully, and Amy's the docile geek who's had enough and is ready to stand up for herself. Or something like that.

All the while, the mothers talk about their daily lives, their children, and their romantic interests. The conclusion the movie comes to is that mothers are very important, mothers are often overworked, and mothers are frequently underappreciated. In many families, all of these things are true. And maybe it's appropriate that it wasn't released for Mother's Day, because these are things applicable every day. Cherish and appreciate your mothers, audience.

Bad Moms is the type of inconsequential comedy that you wish was better than it winds up being.

The plot is very basic, but the themes are solid. However, Bad Moms is a comedy, and the jokes are lacking. It's been directed and written by Jon Lucas and Scott Moore, the team behind 21 & Over, which isn't a good sign. They also co-write the first Hangover, which might be a worse sign. Bad Moms is better than both of those - I know lots of you love The Hangover; stick with me here - but it still only occasionally inspires big laughs. There are chuckles here and there, and it's nice to see more R-rated female-centric comedies, but it feels like a lot of jokes were left on the table.

Mila Kunis, Kristen Bell, and Kathryn Hahn are funny people, although the only one who truly shines here is Hahn. It felt like a lot of her work was improvised, as she spouts off line after line and goes full-bore into the physical comedy. Bell gets one great scene, while Kunis has to anchor the film and can't do as much stretching or joking as a result. Christina Applegate is devilish as the antagonist, while Jada Pinkett Smith and Annie Mumolo get a few good lines as her lackeys. NFLer J.J. Watt shows up as a soccer coach and holds his own; when that football career comes to an end, he might have a decent future in the movie business.

Bad Moms is the type of inconsequential comedy that you wish was better than it winds up being. It has a solid premise and the cast to pull it off, but simply isn't funny enough to be worth going to see. With that said, comedy is the most subjective of genres, and if you like the work of Jon Lucas and Scott Moore, then you're probably going to have a good enough time with Bad Moms. And, if nothing else, it might give you the urge to reevaluate the way you treat your mother - as well as the other people close to you in your life. That's certainly something.

Bottom Line: Solid themes and good actors fall victim to a screenplay that isn't as funny as it needed to be in Bad Moms, which is first and foremost a comedy.

Recommendation: You like Jon Lucas and Scott Moore's work? By all means, go see Bad Moms.