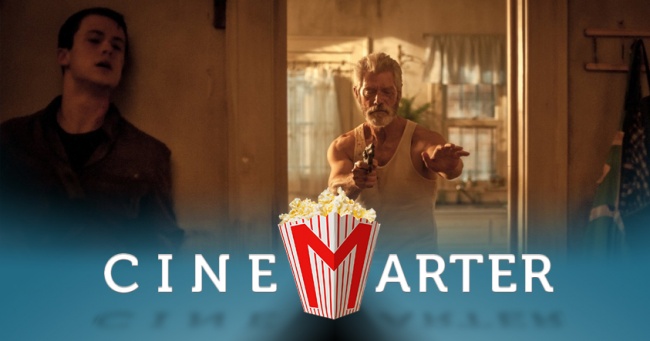 What is going on with 2016? While overall movie quality has taken a dip, for whatever reason we've gotten an astounding (relatively speaking) number of good-to-great wide-release horror movies. Don't Breathe is another one, taking place almost exclusively in a single location and following three teenage thieves who decide to steal money from a blind war veteran - and things don't go well for them. Maybe they should have seen the omen: when casing the joint, the owner's dog causes a jump startle while jumping up and down and barking at their vehicle.

The teenagers are: Rocky (Jane Levy), who lives with her sister and neglectful mother, and hopes to get outta Dodge as soon as she can scrape together the cash. Her boyfriend, Money (Daniel Zovatto), is the rough kind of guy who might convince people to rob from others. Also, his name is Money. The third teenager is Alex (Dylan Minnette), who is in the friend zone and also has a father who works for the alarm company, which is how they successfully break into so many houses. 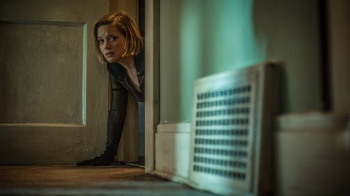 So then we get to the house of The Blind Man (Stephen Lang), as he is credited. He sleeps with a gun under his bed and the home video of his daughter playing on the television. He came into the amount of money you'd think about killing to steal after his daughter was killed in a car crash. And he's blind and old, so he makes the perfect target. Right? As the teenagers soon find out: wrong.

The majority of Don't Breathe sees our teenagers going from room to room, trying to avoid a now very awake and very angry war veteran. It was difficult to break into his home; once he finds out they're inside, it'll be even harder to escape. He has a gun, he has a keen hearing and a sense of smell, and if you've seen even a moment of the trailer, you can probably piece together the rest from there. Except, well, you can't. There are a couple of twists, things get a lot more disturbing than you think they will going in, and - well, I guess the natural progression from a chicken leg is a turkey baster. If you get the reference: (1) you watch depraved movies and (2) you're awesome.

Don't Breathe is another very strong mainstream entry into the horror genre from 2016, and that's just wonderful.

What results is a consistently thrilling movie that holds your attention and keeps you on the edge of your seat for most of its running time. Don't Breathe is one of the most effective films you can see that uses both sound and silence to generate suspense. Every little creak makes you wonder if the characters will be found. There are a couple of prolonged moments that are completely silent and you wind up playing along with the characters, trying to be as quiet as possible. Films can so often alienate their audience; this one puts you right in the characters' shoes.

Director Fede Alvarez (who did the Evil Dead remake, also with Jane Levy) and cinematographer Pedro Luque use the most of their relatively small house (and large basement cellar). They ensure that everything makes logical and spatial sense, all while also remaining claustrophobic and scary.

There are three main problems that keep Don't Breathe from being an unqualified success. The first is that its opening scene is from events that happen later on - most of the film is technically a flashback. If you think about it, that ruins the majority of suspense in the film (although the ride is still fun, even if you know the destination). Second, the two male leads are pretty bland and their characters are underwritten. Third, it sequel-baits at the end, and it really doesn't need one. That's it. The rest of the film is great, it works in spite of these problems, and it even keeps things very efficient, clocking in at just under 90 minutes.

Don't Breathe is another very strong mainstream entry into the horror genre from 2016, and that's just wonderful. It's a tightly paced, claustrophobic, bare-knuckle movie - one with a couple of strong performances from Jane Levy and Stephen Lang. It utilizes sound and silence better than most, it delivers a couple of unexpected twists, and it's genuinely suspenseful for most of its running time - even if, when you really think about it, its in medias res opening doesn't do it any favors. Don't Breathe is a really solid movie.

Recommendation: Horror fans have been spoiled this year, but Don't Breathe is another one that's worth seeing.