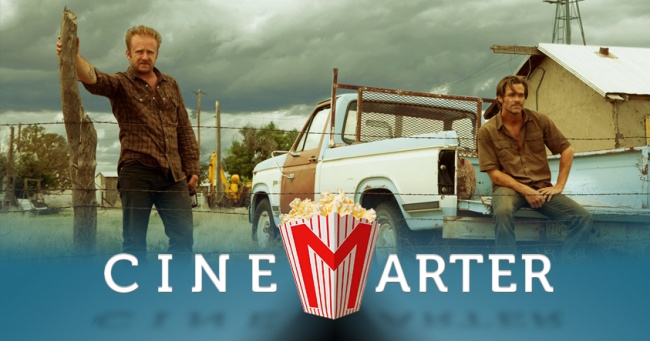 If America really isn't a country for old men, then Hell or High Water would have you believe it's not really a place for anyone else, either, unless you're a bank. Native Americans, generational settlers, and those seeking the American Dream are all out of luck. Unless you want to be screwed over and pushed aside, left in a ditch on the side of the road, you'd better take things into your own hands - and even then, your chances of success are low, and you might just make things messier. Maybe that's a cynical point of view, but Hell or High Water is that kind of movie.

The film follows four individuals - two on one side of the law, two on the other. Toby and Tanner (Chris Pine and Ben Foster) are trying to save their family farm from foreclosure by robbing the banks who are trying to take it - and then using that money they steal to pay off whatever's owed. Meanwhile, a couple of Texas Rangers (Jeff Bridges and Gil Birmingham) try to figure out who's behind the robberies and put a stop to them. 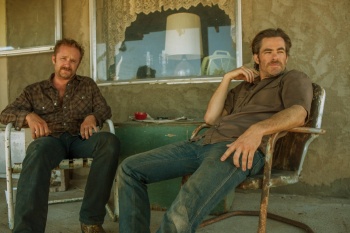 At a glance, that's pretty much the extent of the movie. Toby and Tanner rob places, the Rangers look for clues and interview witnesses, and you can expect some sort of final standoff when only one bank remains to be robbed. Hell or High Water hits those notes and plays to that basic summary. That's looking at it too simplistically; there's a reason we watch two-hour movies instead of reading a five-minute plot synopsis, after all. You'd miss out on a lot of details, a lot of small joys, and some of the best craft you'll see from a movie in 2016.

For instance, you'd miss out on all the interactions between the characters in each group. A lot of the film sees the characters sitting around and talking - planning the next portion of their jobs or while driving, mostly. It's the type of film where you get to know these characters so well and from such an early stage that you enjoy hanging out with them. Their dialogue is always interesting and engaging - and often pitch-black in its humor. Small throwaway lines are revealing. There are going to be comparisons made to certain films by the Coen brothers - I already made a reference in the opening - and if there's one part where that comparison is especially apt, it's in the film's sense of humor, and the interactions between the various individuals. The screenplay from Taylor Sheridan sparkles. (Sheridan went from being an actor - mostly on TV - to writing the screenplays for Sicario and this. That's outstanding.)

Hell or High Water is the type of great movie that leaves you walking out of the cinema with that feeling - you know the one. It's rare, only coming along every so often, but I think it's unrivaled in the arts.

Director David Mackenzie creates a phenomenal atmosphere in Hell or High Water. Opening shots while the brothers are driving in their car sees billboards promising relief from debt, all while oil rigs drill in the background. Businesses are closing their doors. Fewer and fewer people are roaming the streets. You get a real sense at how the economic downturn impacted these people and these towns. And as a result, you can understand why these brothers are doing what they're doing - even if you also know it's illegal. It makes you think about what's right and what's wrong, and if perhaps there's a better solution.

Some movies are really good and overstay their welcome. Hell or High Water, conversely, leaves at the perfect time. It tells a solid story and makes all of its points in an efficient 102 minutes, making the time breeze by. You don't need any more from it when it ends - you leave satisfied - and you're never bored while it's playing. It's one of a select few films that's pretty much perfectly paced. And that's with more than a couple of shots that are there just to set the mood and look pretty. A movie like this can get away with those.

I've probably been one of the biggest critics of Chris Pine as a leading actor - and I don't think it's an unwarranted opinion. When not given goofy supporting roles, he's been consistently bland and shallow as an actor. Here, though, he delivers a revelatory, eye-opening performance - the type of role that should lead to casting directors picking him for more complex and challenging ones in the future. Here he perfectly performs as a hard-done-by father who wants what's best for his family and kids - even if he sees them but once a year. It's a captivating and memorable performance, and Pine is the actor who steals the film. Nobody's bad, certainly - Foster, Bridges, and Birmingham are all more than solid - but Pine's the revelation.

Hell or High Water is the type of great movie that leaves you walking out of the cinema with that feeling - you know the one. It's rare, only coming along every so often, but I think it's unrivaled in the arts. This is an exceptionally crafted, thoroughly interesting and provoking movie that stays for exactly as long as it should, is performed marvelously by its actors, and is gorgeous to look at and be absorbed by.

Bottom Line: Hell or High Water is an exceptional movie.

Recommendation: If it's playing near you, you should go see Hell or High Water.