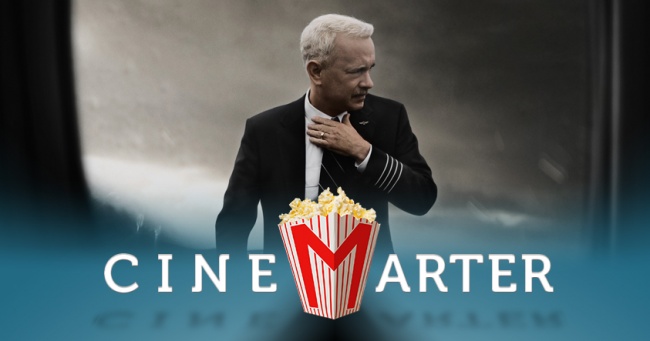 It's a rare feeling to walk out of a big-budget narrative movie wishing that it was a documentary instead. And not just any documentary, but a 30-minute documentary - on cable. That's precisely the reaction I had to Sully, which is Clint Eastwood's take on the "Miracle on the Hudson" and its subsequent events for airline pilot Chesley "Sully" Sullenberger (Tom Hanks). You may remember the event from 2009, when Sullenberger landed a plane on the Hudson River. He was called a hero. The majority of Sully takes place in the days following, when Sullenberger was subject to an investigation by the National Transportation Safety Board (NTSB). The idea is that the self-doubt of Sullenberger and various revelations from the flight will create enough drama to captivate.

Or, that's what the film hopes. It opens after the emergency landing has already taken place, flashing back to the events that led up to it. Already we have a problem: all of the flashbacks are so lengthy and stunting that they break up and forward momentum the film tries to generate. We'll start a scene in the "present," go back to a few days before, and then stay there so long that by the time we return to the present, we completely forget what was happening. 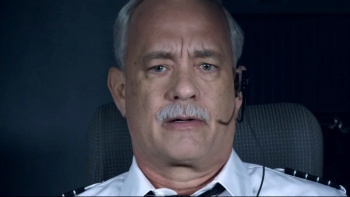 Of course, the flashback narrative was chosen for two reasons: (1) so that the film didn't show the goods too early, and (2) to stretch it out to a feature-length running time. There isn't enough confidence to show us the landing and then go through an investigation, even though it worked in the much better Flight, with which Sully shares many similarities - quality not among them. And there isn't enough of a story to tell it in chronological order. Lengthy - sometimes pointless - flashbacks are the only way to add enough filler to make it worthy of a theatrical release featuring movie stars.

After all, the "Miracle on the Hudson" was a feel-good story precisely because there wasn't much to it. A plane lost its engines shortly after takeoff, it had to land in a river, and nobody was severely injured or killed. There's no drama here, and you know the story already. That's why we've got a half-hearted investigation, one in which the NTSB speculates that maybe Sullenberger could have gotten back to an airport.

When a movie lacks a story worth telling, a protagonist with any depth, any forward momentum whatsoever, a supporting cast that doesn't resemble a garden of pet rocks, and enough substance to not necessitate substantial filler, it isn't a good movie.

The issue here is that Sullenberger is such an upstanding, righteous, heroic, awesome, amazing - DID YOU KNOW HE WAS IN THE MILITARY, TOO?! - phenomenal, experienced, etc. person that you're never going to doubt him. He's played by Tom Hanks of all people! There isn't any drama to be wrung from the investigation angle, either. There isn't anything in Sully to keep us watching, save for the recreation of the landing in the Hudson River, which was incredible in real life and is almost as impressive here.

It's so impressive, in fact, that the filmmakers have decided you need to see it, in full, twice. I can only assume this was to pad the running time even more. We see it in one flashback, and then we watch it again as the characters listen to the recording from inside the cockpit. Don't get me wrong: it's an amazing thing that happened in real life and moderately thrilling the first time we see it in the movie - even though we know the outcome. Apart from some bad plane CGI, it has been recreated with skill. But it lasts approximately 200 seconds. The movie surrounding it is such a bore that it fails to provide us with anything of value.

I already sarcastically described Sullenberger, but that truly is how he's been presented here. He's the most bestest person on the planet, which means there's nothing to him. Any nuance or ambiguity is missing and, as a result, he's not an interesting person around whom to build a movie. It tries to suggest that he has issues at home, but spends only a portion of a scene on them before neglecting to touch on the subject again. Nobody else is engaging to watch, either. He has a co-pilot named Jeff (Aaron Eckhart) and a wife named Lorraine (Laura Linney); combined, they may have enough personality traits to fill a one-word sentence. Sully lacks so much faith in its audience that it focuses on a few passengers - without giving them names or anything of worth - in hopes that this is the reason we'll care about the plane crash.

When a movie lacks a story worth telling, a protagonist with any depth, any forward momentum whatsoever, a supporting cast that doesn't resemble a garden of pet rocks, and enough substance not to necessitate substantial filler, it isn't a good movie. It can be based on an inspirational and real feel-good event - one whose 200 seconds are faithfully recreated - and it still won't be a good movie. Sully isn't any good. It tries to create drama from thin air, but doesn't have the imagination to create even a modicum. Chesley Sullenberger did a great job that day; he deserves a better film than Sully. Clint Eastwood hasn't made anything more than a serviceable movie in almost a decade. Maybe it's time to hang it up.

Bottom Line: Sully is so lacking in, well, everything, that one has to wonder if it should have been a movie at all.

Recommendation: Skip Sully, go watch the landing on YouTube, save yourself $10 and 90 minutes.