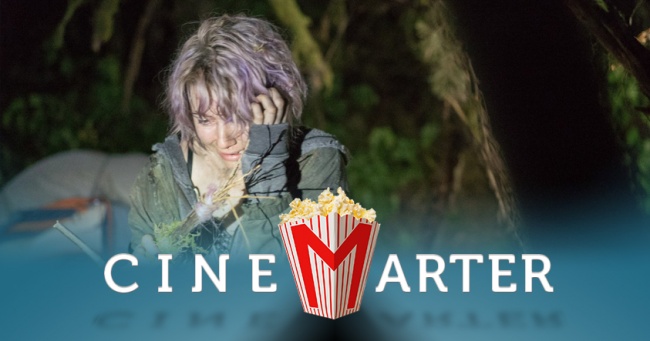 Back in 1999, a much less educated film audience was duped into believing that a trio of individuals got lost in the woods while making a documentary, and that their footage was recovered and edited into The Blair Witch Project. Say what you will about the movie - I think it's a bunch of nothing starring a group of annoyances, but that's just me - but its marketing campaign was more than solid. They set up fake websites, crafted a legend of the "Blair Witch," and did actually trick some people into believing it was real. It was followed up by a cash-grab sequel called Book of Shadows that nobody talks about, and was mostly left alone during the years that followed.

Now we have a too-late sequel - one that ignores all of the other associated media, which includes Book of Shadows - which was filmed in secret under the title The Woods, and was only revealed to be part of the franchise a couple of months before its release. I wager that was to take advantage of the same type of marketing 10 Cloverfield Lane had, but that's just me. What's the hook? The now-adult brother of one of the characters is going into the woods with his friends in order to find his sister, whom he believes is alive thanks to a video he saw on YouTube. 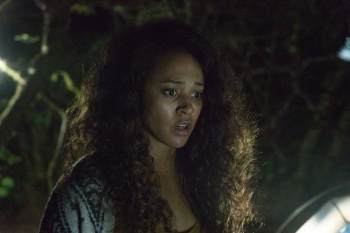 The brother is James Donahue (James Allen McCune), whose sister is Heather. He gets his group of friends - Lisa (Callie Hernandez), Peter (Brandon Scott), and Ashley (Corbin Reid) - a metric ton of recording and safety equipment, and heads to the woods. They get a local couple (Wes Robinson and Valorie Curry) to lead them out there ... and then bad things start happening. You know, actual things, unlike in the first movie where things only may or may not have occurred.

Now, Blair Witch walks many of the same paths - probably both literally and figuratively - that its predecessor did. If you watch them back-to-back, you're going to see a lot of similarities. Lots of shots of nothing, people turning around suddenly for jump startles or fake jump startles, and twigs snapping in the background that immediately put people on edge. This builds atmosphere and anticipation, and leads to a seriously fun payoff in its final 20 minutes. Director Adam Wingard (The Guest, You're Next) knows what he's doing.

Blair Witch feels like a true sequel to The Blair Witch Project, and does pretty much exactly what I'd want from one.

We've got better characters this time around, too. Not in terms of being particularly interesting or engaging, but only because you don't actively root for their deaths. They've got a relatively noble - if stupid - quest, they've come prepared, and they're not annoying as all get-out. Sure, you're fairly certain that most - or all - of them aren't going to make it out alive, but they're perfectly serviceable for us to follow.

The biggest improvement comes from the camerawork, which is far clearer while also being more varied. In addition to handheld cameras, we've also got POV shots and even a drone camera for a few scenes. This is all in beautiful HD instead of grainy VHS, which means that when you've got all these shots of trees being all tree-like, if there's even a bit of movement in the background, you're going to see it and you're going to wonder what it was. Plus, it's simply more pleasing to the eyes.

Basically, take everything that The Blair Witch Project did, make it better, and you've got Blair Witch. Similar stories and similar beats, but improved in basically every way. It's the Evil Dead 2 to the original's The Evil Dead. And even their similarities don't bother me; it's been 17 years since the original. How long was it between the Evil Dead films? Why was it okay for them and not okay for this one? At least the filmmakers here waited a while.

Blair Witch feels like a real sequel to The Blair Witch Project, and does pretty much exactly what I'd want from one. It takes all the elements from the original, makes little changes and some improvements, and repackages it into a less annoying movie where things actually happen and, for the most part, you can see what those things are. It builds atmosphere for a long time before unleashing all that pent-up energy in its final third, and is often creepy and suspenseful. It has jump startles, some of the camerawork is still atrocious, and the acting is generally weak, but it's a better movie than its predecessor and a solid horror movie even if you haven't seen the original.

Bottom Line: An improvement over its predecessor in almost every way, Blair Witch is a worthy successor to The Blair Witch Project.

Recommendation: Horror fans get another good wide release in 2016. Keep supporting the good ones.