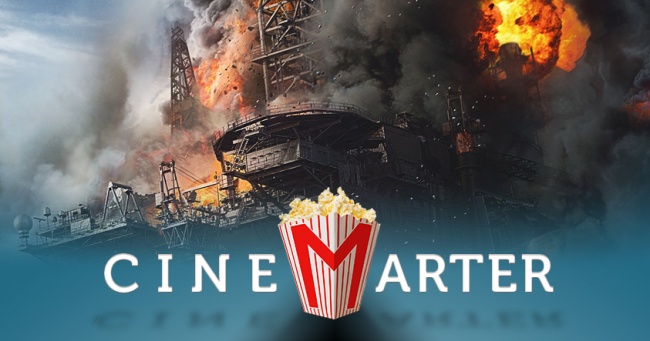 Most of the people reading this will recall the BP oil spill back in 2010 - the one that dumped millions of barrels of oil into the Gulf of Mexico. The event went on for months, made lots of people outraged, and raised many questions about offshore drilling practices and policies. That's pretty much quieted down now - I wonder if the filmmakers had hoped to get Deepwater Horizon released in 2012 instead of 2016 - but now we have a film dramatizing the events that took place on the oil rig that exploded.

Based just on what you've read there and from what you remember about six years ago, you can probably figure out exactly how Deepwater Horizon plays out. The first half introduces us to our core players - Mike Williams (Mark Wahlberg), Mr. Jimmy (Kurt Russell), Andrea Fleyas (Gina Rodriguez), and Donald Vidrine (John Malkovich), among others - while the second half blows everything to smithereens and sees the characters fight for their lives, all while doing inspirational things to save others and try to prevent the environmental disaster that we all know is coming.

This is more or less an effective strategy, even if the inevitability to the proceedings lessens their impact. While the first part is necessary to build up the characters we're going to follow around once things start blowing up, that's accompanied by a constant feeling of wanting to get to the parts that the trailers advertise - the ones with explosions and heavily pressurized mud flying everywhere. You know, the "fun" parts. After all, you watch disaster movies for the disasters.

But it works well enough. We get to know the basics about these people, and then we care, at least somewhat, whether or not they're going to survive later on. That's important from a movie perspective but also from a social-awareness position. The media coverage, from what I remember, was primarily focused on the environmental aspect of this disaster. The film, conversely, focuses on its humans - some of whom will not be making it to the end of the movie alive. People died on the Deepwater Horizon, and that's something that often gets overlooked and forgotten.

Deepwater Horizon is the best disaster film in a while, even if it isn't going for a ton of originality.

The second half, with things constantly going "boom" and fire popping up wherever is most inconvenient, is a loud, busy, and hectic experience - as it should be. It can be a little hard to always tell what's going on, but I figure that's part of the point director Peter Berg is trying to get across. In other words, it's not a lack of skill or laziness that creates this effect; it's a desire to put the audience in a position similar to the characters we're watching. It's effective, leading to a thrilling experience.

Beyond that, there isn't a whole lot to say. It's almost exactly the movie you expect to see going in - it's not going to reinvent the disaster movie wheel - and everything is crafted and staged in a way that works. The actors all do their jobs, with Wahlberg, Russell, and Malkovich as the standouts. The disaster portion is well-crafted and feels real, even if, by its true-to-life nature, it gets a little repetitive. You can't keep throwing different challenges at the characters like these things usually try to do for variety's sake, which keeps it from truly excelling.

Deepwater Horizon is the best disaster film in a while, even if it isn't going for a ton of originality. Watch a trailer and you can figure out how everything's going to play out. But that's okay, especially when there aren't that many of these things out there. The only surprise comes from it being a film about the Deepwater Horizon explosion and eventual Gulf of Mexico oil spill - and it focuses on the former and the humans involved rather than the latter. That runs counter to how the entire event was covered, and subsequently how we remember it - and that might make it more valuable than anything else. It's a technically sound movie that is skillful in its approach and does the job from start to finish.

Bottom Line: Deepwater Horizon is a fittingly workmanlike disaster movie that simply does the job.

Recommendation: It's worth seeing for its technical prowess and different perspective on the disaster.