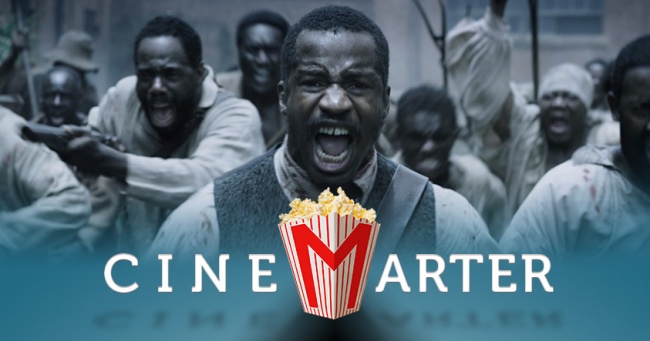 The Birth of a Nation was destined - and perhaps designed - for controversy right from the start. And no, I'm not even talking about the resurfacing of a rape case against star/director/writer/producer Nate Parker. As soon as you see that a film is using the title of a pro-KKK piece from 1915, you're tempting people to talk about your film. Making that film a hero piece about Nat Turner, who led a slave rebellion in the mid-1800s, furthers that. Add in the "Oscars So White" movement - during which time the film was premiering at Sundance, and you've got a film that feels almost designed to poke as many proverbial Controversy Bears as possible.

The film, as mentioned, is about Nat Turner (Parker), who grew up as a slave, learned to read, became a preacher to his fellow slaves, eventually saw the injustices in the system for what they were, and rounded up a group slaves to revolt - eventually resulting in the death of a few dozen white people. The aftermath saw even more black people murdered - many of whom had nothing to do with the rebellion - simply for the color of their skin. 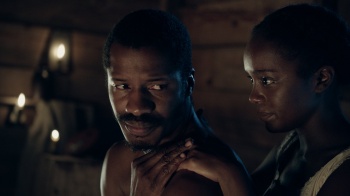 So, yeah, it's an angry-about-slavery movie, of which we've had a few high-profile cases in recent years. This is a story that Nate Parker clearly cares about and wants to bring forward to the general audience. He directed, produced, wrote, procured financing, and starred in the picture. That's a Robert Rodriguez-level of dedication to a project. Here's the difference: Rodriguez started with minuscule budgeted projects and did it all out of necessity. Parker's film is comparatively huge and he feels stretched thin. He didn't have to do it all and probably should have given some of those roles to someone else - especially given how this is his feature-length directorial and screenwriting debut. (He's also very rarely been a leading actor.)

You can tell that The Birth of a Nation has been extensively researched. There's a great amount of detail put into the movie, and it plods along for the first two acts in order to showcase it all. We watch Turner as a child for a lengthy period, then see him as an adult as he journeys across the country, preaching, and discovering how bad things were for slaves in other areas of the nation. Then the rebellion finally happens. Parker wants the film to be a testament to Turner's life, but there's a reason movies often leave out boring or repetitive moments. And the ones left in here don't add a whole lot to his character. It's not that you won't care about him, but he's too thinly written to make much of the drama function like it should.

The Birth of a Nation is a film designed to get people talking.

Essentially, if you've already figured out that slavery was an awful thing - even the "good" slave owners were often less than decent - you don't have a whole lot of reason to watch The Birth of a Nation. The film hero worships its protagonist, rightly condemns slavery, and then delivers a cathartic finale which, while strong, might not be worth a plodding first two-thirds. Turner isn't an interesting enough character, as written here, to have almost every frame dedicated to him. That's too bad, as there's a great movie to be made here. Parker just can't quite get there.

A large part of the problem is that, with such a singular focus on Turner - and with Turner being presented as a character lacking in depth and intrigue - some of the atrocities don't feel like they're given a proper examination. There's (unshown) rape, and you see a man get his teeth pulled out - for only a couple of examples - but the focus is always on Turner, not on them. And Parker isn't a good enough actor to singlehandedly carry the weight of everything that's wrong with slavery - I don't know if any actor is. But that's what he tasks himself with. He's more than serviceable, but he isn't that good.

Of the supporting cast, the only two with significant enough screen time - or awfulness - are Armie Hammer and Jackie Earle Haley. The former plays Turner's owner, while the latter plays just the most disgusting racist imaginable, showing up at various points to showcase the worst of humanity. They're both good, although they, too, are thinly written. Even Nat Turner's wife, Cherry, here played by Aja Naomi King , doesn't get a whole lot to do - beyond play a victim whose focus gets transferred to her husband.

The Birth of a Nation is a film designed to get people talking. It wants people discussing Nat Turner, it wants to remind us of the atrocities of slavery, and it wants to worship its central character and present a detailed story of his life. It achieves all of that. It does so with a slowly paced plot and a thinly written cast of characters. Is it still, at times, quite powerful? Of course it is; the subject matter would have to be fumbled to a great extent for it not to be. And its lasting impression is strong, as its third act works incredibly well. The journey getting there is much less effective. It accomplishes its goal and is a better-than-average film, but it's not the great film one would hope it would have been.

Bottom Line: Important but somewhat disappointing, The Birth of a Nation accomplishes its goals but can't get past weak characterization and a plodding plot to become great.

Recommendation: It's worth seeing, especially for its third act, but it's not essential viewing.