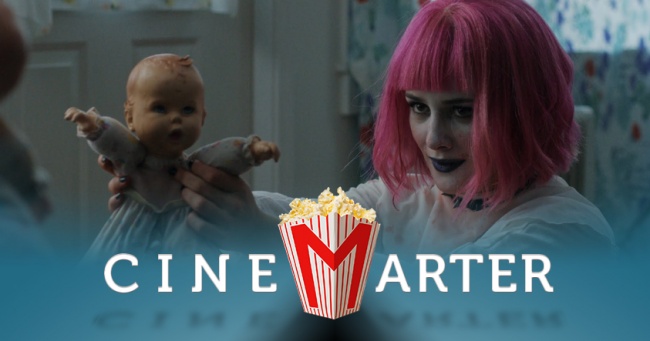 Sometimes it's enough to change out the pieces and let them go through what would otherwise be a fairly typical story. On paper, there isn't a whole lot that Little Sister does differently from its contemporaries. "Girl comes home and family dysfunction occurs" basically sums up its entire premise. But films like this one get but - and sometimes do so much more than that - because of the details, and by making the various players atypical.

For example: in this film, the girl, Colleen (Addison Timlin), in that simple description is an aspiring nun who has been estranged from her family for some time. She gets an email claiming her brother (Keith Poulson) has returned home. She asks the Reverend Mother (Barbara Crampton, of all people) for a few days to go visit with him. And then we meet her family, who are interesting characters - and she turns out to be, too. Set it against the tense political backdrop of October 2008, and you've got something potentially special.

Take the brother, who just returned home from the hospital, which he entered after a near-death experience in Iraq. His face - and likely lots of his body - has been burned to unrecognizable degrees. He's now a recluse, refusing to do much of anything. When Colleen, perhaps the only person in the world to whom he couldn't say "no," gets him to take a trip into town, people stare and shuffle away. These are the same people with "support our troops" bumper stickers. Oh, yeah, Little Sister has more than a little something going for it.

We've also got an internal conflict within Colleen, who was one of those teenagers heavily into the goth culture. She returns to her room to find it just as she had left it - bringing back a ton of feelings. We wonder whether she thinks she made the right decision. Or if it's possible to be a nun and be really into heavy metal. What is her identity? And then we see her mother (Ally Sheedy), who has scars on her wrists and is usually high on at least one drug, and we begin to understand exactly why it was that Colleen left - and perhaps why she chose such an extreme counter-culture lifestyle choice.

Little Sister is a film that doesn't seem like it's going to be much of anything on paper but, thanks to a few key decisions, it turns into something quite great.

Little Sister shines in its understanding of its characters, in setting a melancholic - but not emotionally manipulative - tone, and in delivering so many perfect small moments. The relationship between Colleen and her brother is refreshing, honest, and wonderful. The tensions, both spoken and unspoken, between the various characters, is palpable. Colleen reunites with a high school friend (Molly Plunk) and you don't for a second think of these interactions as actors playing pretend.

About the only character who comes off as slight is the father (Peter Hedges), but perhaps that's because he's the type of character who stays in the background, just trying to get by without upsetting anyone. That, in and of itself, is kind of interesting, although the film doesn't fully capitalize on that. Everyone else, though? There's more than enough there to ensure that, whenever they're on-screen, we're interested in what they're going to do. There's also a dark sense of humor present for most of the film, and that's almost always appreciated.

A film like this demands actors who are strong and who have excellent chemistry with each other. In the lead Addison Timlin is wonderful and restrained, and seeming more than comfortable regardless of the skin her character's put into - nun or goth, daughter or sister, friend or independent. Ally Sheedy is fantastic, always one step away from bursting at the seams or doing something awful. Keith Poulson, with makeup from Brian Spears, is often playing sad, but the moments in which he lights up are great. There's no weak link in this cast, and it's a joy to watch all of these characters progress through the film.

Little Sister is a film that doesn't seem like it's going to be much of anything on paper but, thanks to a few key decisions, it turns into something quite great. From its deep characters, to its political backdrop, it always gives you something about which you can think or care. It's got great acting, engaging ideas, and is proof that a movie can change some of the pieces of a pretty generic template to become much more.

Recommendation: If any part of this movie sounds intriguing to you, you should watch it.