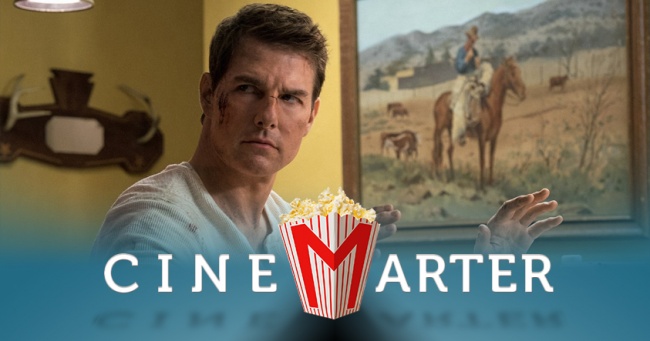 Despite not making a ton of money at the US box office, 2012's Jack Reacher made bank in the increasingly important overseas market - so much so that it was apparently a sound financial decision to greenlight a sequel. Based on another book in the Lee Child series, Jack Reacher: Never Go Back once again sees Tom Cruise as "Mr. Awesome" Jack Reacher, and gives him another mystery to solve - with his fists. Or, more correctly, with his legs, because I'm pretty sure at least 80% of the film involves Tom Cruise (and sometimes Cobie Smulders) running.

I would try to make sense of the plot, but (1) it takes a lot of exposition to make any semblance of sense and (2) it ultimately matters so little that it's not worth it. Basically, Reacher used to be in the military, and now he roams around the country fighting bad guys. For whatever reason, he started having nice phone calls with a current Major (Smulders) and travels to Washington to meet her. Upon his arrival, he learns she's in prison under charges of espionage. He breaks her out, they flee, there's some conspiracy somewhere, and he also learns that a teenager (Danika Yarosh) may or may not be his daughter. 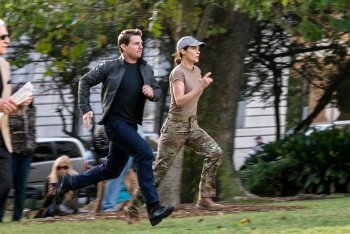 Most of the time, though, it's Reacher and one or both of his new female accomplices running from place to place or talking to people to try to figure out what's really going on. Will you care? Absolutely not. The story is ludicrous, nothing in it matters, you're never once going to suspect that any of our main characters will come to any harm - or actually did the things of which they've been accused - and the father-daughter story is here just to try to humanize Reacher, which doesn't work even in the slightest. But, hey, her presence does give Cruise and Smulders reasons to squabble like an old married couple. So that's something.

There aren't a whole lot of action scenes, and the ones we do get aren't anything special and certainly aren't exciting. There's one good moment - and it's in the trailer. It's all over-edited nonsense, and because we don't have any reason to care or fear for the lives of anyone involved, it can't get a hold of our emotions. Mindless action becomes white noise if it's not technically impressive or emotionally gripping.

Jack Reacher: Never Go Back is a mundane and pointless sequel to a movie that didn't make much of a splash at the domestic box office and only barely made enough internationally to justify its existence.

Despite having three years between the release of the first Jack Reacher and the filming of the sequel, apparently nobody wanted to come up with an involving screenplay. Jack Reacher: Never Go Back feels rushed and cheap, unfocused and pointless. They randomly go from Washington to New Orleans for ... reasons? I guess so they could stage the climax in a big parade. There are lots of military people but almost none of them get any character or development.

Jack Reacher: Never Go Back doesn't even get to have some knowing fun by poking fun at how everyone thinks its protagonist is the greatest thing in the history of mankind. The first movie did that - and showcased him as such. This one? He's just a guy. He takes out four guys really easily before the movie begins, but in the next fight has a 2-on-1 advantage and struggles. Everyone calls him "Major" - he corrects them; "Ex-Major" - but beyond that, his legend hasn't seemed to travel much.

It makes you wonder why Tom Cruise would even want to come back for a sequel. I mean, I know he only does a movie or two a year, but you have to imagine he gets pitched dozens of them. Was this the best of the bunch? Cruise is fine but nothing special in the role, and it doesn't even give him as much to do - or as much hero worshipping. Cobie Smulders probably makes a bigger impression in her role, although that's only because she gets to shine in a couple of action scenes, and we haven't really seen that before. With Cruise? This is been-there-seen-that territory.

Jack Reacher: Never Go Back is a mundane and pointless sequel to a movie that didn't make much of a splash at the domestic box office and only barely made enough internationally to justify its existence. It's a cash-grab, basically, telling an uninvolving mystery, delivering inconsequential action scenes, and featuring a lot of running. Maybe Cruise just wanted to be paid to exercise? This is boring, rushed, and not worth your time or money.

Bottom Line: There's no point to this bland sequel.

Recommendation: Late-night cable watching to help you sleep? Okay, maybe it's worth it in that case.