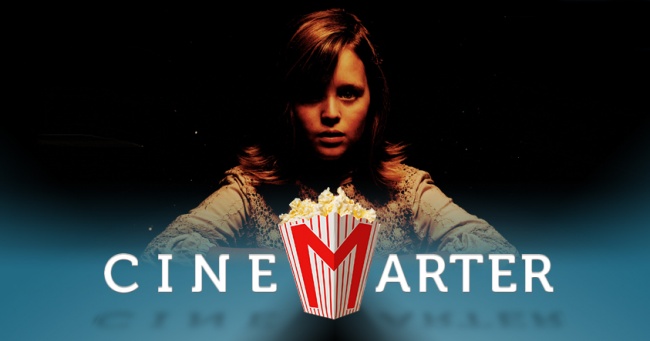 If you would've told me that the best movie of a weekend would be the prequel to Ouija - a movie that was in my bottom 10 of 2014 - I don't think I would have believed you. Sure, the trailer wasn't horrible, but trailers show the best parts! And, yeah, Mike Flanagan is the director, and he's quietly become one of the best mainstream horror directors working, but I still would have shaken my head and walked away. It opened against a mediocre Tom Cruise movie! It would have to be heads and tails better than its predecessor to beat that. Well, hold onto your hats, folks, because Ouija: Origin of Evil, is very good.

Set in the 1960s, prior to man landing on the moon, Ouija: Origin of Evil follows the Zander family, who live in a nice house and have a television but are barely scraping by after the death of the father/husband. The mother, Alice (Elizabeth Reaser), makes money by pretending to be a fortune teller. She's aided in the scam by her two daughters, Paulina (Annalise Basso) and Doris (Lulu Wilson). They're happy enough, given the circumstances.

After lots of scene and mood setting, a Ouija board is brought into the equation. The family figures it'd help sell the scam. Doris takes to it like warm butter to bread, and soon enough finds herself semi-possessed. So, yeah, it's one of those movies. Weird things happen, the family notices way too slowly, there's a priest (Henry Thomas), a back story gets thrown into the mix, and before you know it you've had a bunch of scares, a few laughs, and a couple of hours have passed.

Ouija: Origin of Evil is an effective horror movie, although it offers very little when it comes to originality. You've seen basically this entire movie before, but with a different setting and one of the children was probably male. However, pure craft can be enough to make up for that, and it does so here. You're not thinking about how this is just like a bunch of other films you've seen before while watching it; you're wondering when the youngest girl is going to start climbing walls.

Ouija: Origin of Evil might have the biggest positive disparity between first and second films of a franchise in movie - or at least horror movie - history.

Atmosphere is something that a lot of these movies tend to overlook, but it's paramount in setting up the scares. Ouija: Origin of Evil takes its time to set the stage before dropping us into the lair of the possessed girl. It feels like it earns its jumps and screams and embarrassed laughter from the audience. Instead of rolling our eyes at the telegraphs, we feel involved in the characters and the story - to the point that our minds aren't wandering, we're immersed, and - BOO! - the spooky spirit scared us.

On the downside, after the fact, we will realize how similar it is to other movies, and it won't have as much of a lasting impression. It's also not a film that you should think too hard about; I'm not sure what its rules are when it comes to its possessions and evil beings, but I'm fairly certain they're not consistent. That helps keep things suspenseful, but doesn't lend itself well to scrutiny.

Of the actors, the only one to make much of an impression is Lulu Wilson, the kid who gets to do the brunt of the evilness - acting as a conduit for the spirits. She has a sinister smile and piercing eyes, and seems to know exactly how to use both to achieve maximum creepiness. Elizabeth Reaser is solid, Annalise Basso is mostly forgettable, and Henry Thomas is kind but otherwise not a whole lot else. The characters have enough going for them to hold our attention, but not anything beyond that. It's not a character study and doesn't pretend to be. It's all good enough to get by.

Ouija: Origin of Evil might have the biggest positive disparity between first and second films of a franchise in movie - or at least horror movie - history. Turning something as egregiously terrible as Ouija into a solid, suspenseful, and spooky movie? Mike Flanagan, you deserve a gold star. It's not very original, but pretty much everything about Ouija: Origin of Evil works. It's compelling, immersive, and makes the time fly. Who could have seen this coming?

Recommendation: Skip the first film but watch this one.