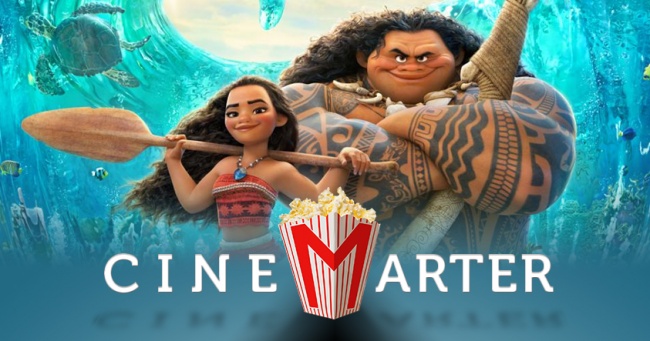 Moana functions very well as a poster child for why diversity in film matters. Take away its specific - and not oft-depicted - culture and setting, and you've got a pretty bog-standard Disney movie. But set it in the South Pacific islands, feature its culture, use that culture's mythology, and you've got something that ultimately works. Changing those pieces around makes the movie. That foreign aspect adds mystery and intrigue, and shows us something new. Meanwhile, a different group of people gets to be depicted on film. If that's not a win-win, I don't know what is.

Our heroine is the eponymous Moana (voice of newcomer Auli'i Cravalho), the daughter of the village chief (Temeura Morrison) and someone who spends her entire childhood wanting to sail the seas - which plays contrary to her father's belief that anything beyond the reef is deadly. As she gets into her teenage years, problems begin to arise on the island: the crops aren't producing and fishing is getting diminishing returns. So, she has to venture outside the reef, find a demigod named Maui (Dwayne Johnson), and take him to a faraway place in order to put a stone back into the side of an island in order to restore the balance of nature. (It gets explained in more detail in the movie.)

So, yes, it's a "team up with a reluctant partner to take a MacGuffin to a place" story. Moana is very much the chosen one - her entire arc involves getting to a mental place where she's okay with being the chosen one - Maui is the muscle, and they even have a stupid animal sidekick: a chicken named Heihei (Alan Tudyk). The movie points out that this is a cliche, but that doesn't excuse its indulgence.

But you set the movie in the South Pacific islands, with this culture, and it becomes more interesting. We get to see a couple of monsters, there are a bunch of songs, the visuals are stunning - the "sea" scenes might be the best since one of the early Pirates of the Caribbean movies - and there's enough humor. Changing the pieces of a relatively simple and well-worn story makes things fresh enough that you hardly care that you've heard it told before.

It's a very solid movie; it's just not very original, and some of its musical picks aren't the greatest.

The film doesn't approach greatness, though, and a large part of the reason why stems from the Moana character. She's bland, to put it frankly. As mentioned, her arc is basically getting her to be confident in herself - embracing being The Special, basically - and there isn't anything else to her. Any cultural benefit she gets from being something new winds up largely being negated by how dull Moana herself is. Maui at least has a whole "need for approval" complex going on; she's just a determined, but not quite confident, hero.

Moana has a bunch of songs - although there are long stretches without them - as Disney movies often do. There are only a couple of even semi-memorable ones. "You're Welcome" is Johnson's big solo outing, and it's actually pretty good. And "How Far I'll Go" is repeated a couple of times; it's solid. The rest? They range from unmemorable to downright bad. "Shiny" is the worst, as far as I'm concerned, which is a shame as it's performed by Jemaine Clement, who is very talented. It just misses the mark.

Newcomer Auli'i Cravalho serves as a strong voice actor for the leading role, giving Moana lots of energy and life. Dwayne Johnson is charming as usual as Maui, and as it turns out he can sing, too. Temuera Morrison and Nicole Scherzinger play Moana's parents, although neither of them gets a whole lot to do - even if the performances are good. There isn't any poor singing, either; even when the songs don't hit as well as they should, it's not a problem with the actors not being able to sing them. I'm looking at you, Les Miserables.

Still, I come back to the visuals - the sailing of the seas, a giant lava monster, an inventive land of various creatures - and the strong vocal performances, and the way that it does depict a culture not often shown in the movies. All of that, in addition to the humor, allows Moana to be more than watchable. It's a very solid movie; it's just not very original, and some of its musical picks aren't the greatest. Moana is fun and is definitely worth seeing.

Bottom Line: It's a simple, well-worn story, but it's told well, features a culture not frequently seen, and is visually stunning.

Recommendation: Moana is worth watching if you like watching animated movies, adventure films, or musicals.