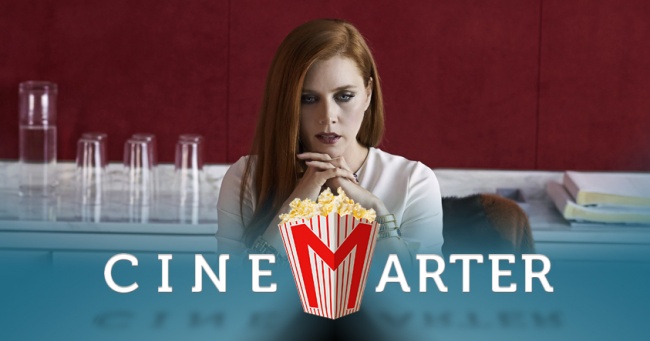 The opening credits of Tom Ford's Nocturnal Animals does not prepare you for what comes after, but do serve as a way to immediately open the eyes of the audience and make us pay attention through shock. They feature multiple large and stark-naked women jumping and dancing, all while filmmakers' names are displayed on the screen. It's shocking and grabs your attention. It has little to do with the rest of the film, but boy is it a way to lure during a time when most films lull.

The whole exhibition is an art gallery presented by Susan (Amy Adams), who is married to Hutton (Armie Hammer) but isn't happy. One day, she receives a package in the mail containing a book from her ex, Edward (Jake Gyllenhaal). He's a writer, and he's got a copy of his novel that he'd like her to read. It's dedicated to her and named after a nickname he gave her when they were together. From there, Nocturnal Animals follows three stories: Susan reading the book, a flashback to when Susan and Edward were together, and the events that are presented within the novel.

If I were to guess, I would wager that the fictitious events take up about half of the film's screen time. It feels like the most important of the three stories, with the flashbacks only providing necessary context and the present-day scenes used primarily as a framing device - as if the filmmakers wanted to tell a Hell or High Water or Cold in July-type of Western crime-thriller but decided to frame it in a way to make it more intellectually satisfying, even if it sacrifices emotional resonance in order to do it. The movie is based on a novel written by Austin Wright, though, so I'm quicker to blame him for that.

The novel story sees a man named Tony (Gyllenhaal, again) and his wife and daughter driving on a lonely road in the middle of the night. They're soon harassed by Ray (Aaron Taylor-Johnson) and a couple of cronies - culminating in the murder of the two women. Tony spends the rest of the film trying to find the men responsible, aiding a detective (Michael Shannon) in the hunt.

Nocturnal Animals is fascinating even if it isn't always compelling.

Is it important that Gyllenhaal plays the dual role of both the writer and the character in his story? Well, yes. Just like how the fictional wife is played by Isla Fisher, who looks not dissimilar to Amy Adams. The novel is a metaphor, although exactly for what is left open to at least some interpretation. One of the main themes of the film is revenge - so subtly brought across when Susan comes across a giant painting with the word "REVENGE" in big, bold letters - but exactly how writing a book works as Edward's revenge is a little unclear. Who in the book represents whom in real life?

I like the idea that Susan is represented by the three men - the nocturnal animals, so to speak - and that since they ruin Tony's life, that's Edward saying "you ruined my life." That's especially true after an unsurprising late-game reveal from one of the flashbacks. I'm sure there are other theories out there, but this one seems the most solid to me. It makes an otherwise simple movie about a woman reading a book mean more, which is awesome.

The thing about it is this, though: the only characters we begin to care about are the ones inside of the novel. The "real" people don't actually do a whole lot, and since we're always fully aware of the fictitious nature of the novel characters, the film misses out on almost all of the emotional connection we might have. Okay, so we feel bad for Edward, I guess, but we've only seen the actual guy a handful of times. His novel avatar is there, and we see that grief, but it only halfway transfers, as if there's a loss in the amount we care - no process is 100% efficient, after all. And the film is weaker for that. He's also really the only character to whom we have a connection; so many of the "real" characters only appear for a scene or two.

For instance, actors like Armie Hammer, Laura Linney, Michael Sheen, Jena Malone - they're hardly in the movie. It comes down to: Adams, who spends a good chunk of her time reading or reacting to what she just read; Gyllenhaal, in dual roles; Shannon, as the morally questionable detective working the case; and Taylor-Johnson, the clear leader of the villains and so captivating and charismatic in doing so. The leading actors are so great that they keep things watchable even when the script gets a little off-track.

Nocturnal Animals is fascinating even if it isn't always compelling. It's intellectually stimulating even if it's not the most emotionally absorbing. It has great actors turning in wonderful performances in a story that's only as engaging as it is because of the way it uses its central metaphor and themes. It doesn't explain everything and leaves some things open to interpretation. If nothing else, it's a film unlike most you'll see and from its opening credits acts as a shock to the system. That's worth something - and that it's a strong film on top of that makes it even better.

Bottom Line: For good or ill, Nocturnal Animals is unlike almost anything you'll see this year.

Recommendation: It's not for everyone, but if Nocturnal Animals sounds like your kind of thing, you should go see it.