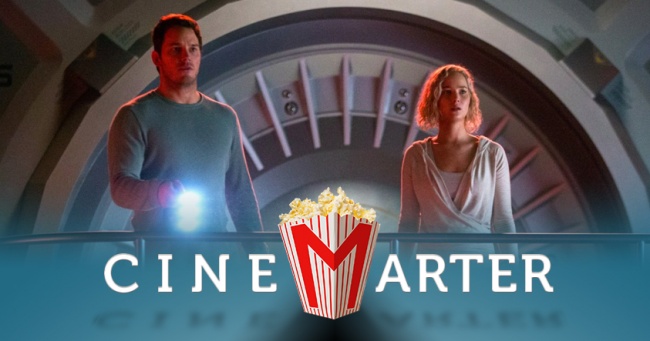 Before we get into Passengers, there's something else that needs addressing. Misleading marketing is terrible, yes - and Passengers has some of that - but condemning a film because of it isn't fair. Is is fair, though, to describe a plot point that happens fairly on and isn't a spoiler in the movie, even though the trailer made it seem like it was one. Okay? Okay.

So, Passengers is going to be a movie that you come out of and want to almost immediately discuss, in large part because a large chunk of its plot hinges on a decision made by its protagonist, and that decision will be controversial. The lead is Jim (Chris Pratt), who is one of 5,000 passengers on the Starship Avalon, which is traveling to a colony called HomesteadII. It's a journey that takes an excruciatingly long time to complete, so all of the passengers and crew members are put into hibernation, set to wake up a few months before the trip is complete. Jim wakes up with 90 years to go - only 30 years in. He is the only one to wake up - and the only semi-sentient being around is an android bartender, Arthur (Michael Sheen). 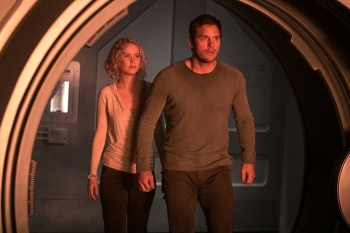 He deals with this for a year, and comes inches from killing himself to end the isolation. However, he previously noticed a woman, a writer named Aurora (Jennifer Lawrence), and has contemplated waking her up from her hibernation. Here's your ethical conundrum, everyone. Will he do it? Will he ruin someone else's life - the movie goes so far as to literally call it "murder" - to satisfy his own need for companionship? The trailer makes it seem like a twist, but it isn't; that's just a marketing hook.

Of course, he eventually chooses to do it - and subsequently hide this fact from her. A large chunk of the movie is dedicated to watching Jim in isolation, and then watching Jim and Aurora slowly bonding, bereft of other choices. But we need some excitement, so it eventually turns into a disaster movie. It almost feels like two movies, with the only thing linking them being the small mechanical failures we see in its first two-thirds, which eventually escalate to the explosive final third.

Passengers, like the vessel at its core, is an empty, pretty film.

The only thing people are going to care about is the moral choice, though, and whether or not, after Aurora eventually learns the truth, she can forgive Jim. The movie gives her agency in this matter; she gets to choose. As far as I'm concerned, it's handled well. It's mulled over and discussed and treated seriously. We understand the difficulties in making such a decision. It could have been mishandled, but I don't think it was.

The movie surrounding that decision, though, isn't anything special. The parts where Jim is isolated turn out to be more boring than insightful - there's little psychological examination being done here. The - for lack of a better word - "dating" portion of the film is about the thinnest romance you can imagine, watchable only because of the easygoing chemistry between Pratt and Lawrence. And the disaster section doesn't feel earned - it comes across more like a tacked-on "we need a way to end this" scenario. It doesn't help that it has a character appear to (1) explain everything, (2) fix or describe how to fix things, and (3) disappear after his purpose is fulfilled.

The spaceship, the Starship Avalon, is wonderfully rendered, and if there's a reason to watch Passengers, it's probably for the ship. It's fun seeing all of the technological improvements that the filmmakers envision - their visions of the future on full display. The special effects are great, and the cinematography is, at times, wonderful - some of the shots of space rival Gravity. There just isn't much to the film beyond this one ethical dilemma, and that's not enough on which to hang an entire film.

Passengers, like the vessel at its core, is an empty, pretty film. It doesn't have enough to say or do to be anything more than a passable experience. Its strengths lie in the technicals, with its special effects and cinematography both shining over its story and characters. Chris Pratt and Jennifer Lawrence have strong chemistry but rarely do much for their characters. Its moral choice is, I think, handled well, and if nothing more, Passengers will get people talking. That's engagement, and engagement is a good thing.

Bottom Line: Passengers might not work all the way, but at least it's engaging and entertaining enough to keep our attention.

Recommendation: Its visuals alone might make it warrant a trip to the cinema, but it'll be a better home video release.