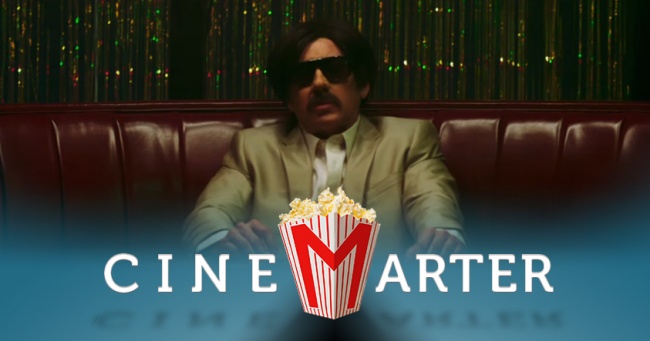 Thanks to an illness for preventing me from getting to the theater to see and review A Monster Calls.

It's kind of sad to think that the majority of movies on the resumes of both Nicolas Cage and John Cusack have gone direct-to-video. Cage has an Oscar, and Cusack has several good performances under his belt, but their selling power has diminished to the point that they're now playing second fiddle to Adrian Grenier in a VOD action-thriller. Grenier, of course, is noteworthy only for being the least believable part of Entourage. Someone with his acting ability is going to become a big-shot in Hollywood? Life certainly didn't imitate art.

Arsenal takes 30 minutes to get to the plot. A good movie would use that time to develop its characters beyond stock and stereotype, but I think you can probably already gather that Arsenal is not one of those. We open in the past, with a couple of brothers who only rely on each other. The oldest is Mikey, the youngest is JP, and together they do a mediocre imitation of a hypothetical early David Gordon Green short. Mikey acts like a father to JP, especially after tragedy strikes their actual home life. We then see them go about their day-to-day life. All of this takes 30 minutes. Then Nicolas Cage steps in to jump-start the plot and save the movie. The defibrillation attempt was unsuccessful. 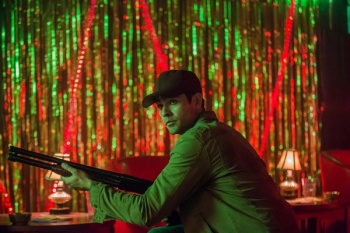 Cage plays Eddie King, a name you can probably already figure out means he's a gangster. He kidnaps the now-deadbeat Mikey (Johnathon Schaech), to extort the money from JP (Grenier), who has a wife and a job and is a blue-collar American success story. Whether King is in cahoots with Mikey is left for us to find out later, but these movies always do that: if it looks like they are, they won't be, and vice versa. It's the lazy man's attempt at surprising the audience. And because the first third of the film tries its darnedest to set up Mikey as a decent guy - underneath the shady lifestyle, of course - you had better not guess wrong when it comes to the revelation.

So, what does most of Arsenal consist of? JP goes around, pretending to act tough, to try to find out who took his brother. And then trying to get the ransom money. And then planning to kill the man who took his brother. All of this feels like it's straight out of any crime movie you've ever seen in which someone's family member is kidnapped. It's hard to imagine a simpler, less creative movie, but then I remember director Steven C. Miller was behind Extraction just over a year ago, and now I wonder which one's worse. They're both bad movies centered on a hostage, so I guess that's his jam now? Regardless of the pick, a plea: Stop.

Arsenal is the biggest VOD release of the first week of 2017, and we can only hope that it does not serve as an indication of the quality of the films to come.

About the only thing of note with Arsenal, really, is that Nicolas Cage is doing ... something here, although it's anyone's guess what that actually is. You know, we're going to look back in 30 years and study the career of Nicolas Cage. There will be college courses dedicated to it, much like there are for great directors. It doesn't seem to matter what the movie is, or who's behind it - Cage is going to do what he wants, and it may or may not line up with the rest of the film. Here, he dons a bushy mustache and a fake nose and goes from being tired but odd to alive and deranged.

However, at least Cage is compelling. John Cusack comes across far more as a nonentity - the type of I'm-doing-this-for-a-paycheck role that you can't imagine paid a whole lot, given the film's direct-to-video status. Adrian Grenier isn't a deep actor, and it turns out he can't pull off the "tough guy" performance, either; watching him try that might be the funniest thing of 2017. Johnathon Schaech is believable as a criminal with a bit of a heart.

Arsenal is the biggest VOD release of the first week of 2017, and we can only hope that it does not serve as an indication of the quality of the films to come. This is a movie that thrives on cliche, has almost no original thoughts in its head, and doesn't for a moment want to do anything more than exist. It's bad, lazy filmmaking, and the only reason to even consider watching it is for the five or so scenes in which Nicolas Cage shows up and does whatever it is that Nicolas Cage does.

Bottom Line: Arsenal is a terrible movie from start to finish with pretty much no redeeming factor.

Recommendation: Unless you're a huge Nic Cage fan, Arsenal is not worth seeing. And even if you are, his scenes are the only ones of note.