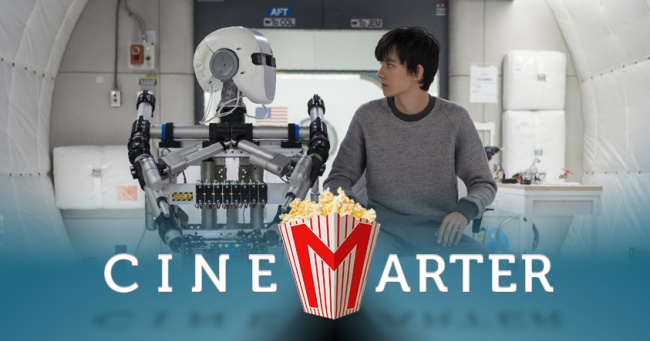 It occurred to me just after watching The Space Between Us that it's an actual movie that you can go watch in theaters that's been made by adults and not, in fact, a two-page story written by a 12-year-old on Tumblr right after he or she watched The Martian. Of course, the screenwriter is Allan Loeb, who has written precisely zero good movies in his decade-long career, so maybe a Tumblr kid would've been a better choice.

The basic idea isn't a bad one. A child is born on Mars right around the time we're starting to establish semi-permanent settlements on the planet. His mother dies in childbirth. He has to stay on Mars forever because his body developed under its gravity, not Earth's. He wants to come back to Earth both to meet both his father, whom he doesn't know, and a girl with whom he's been chatting over the internet. But since his body literally cannot handle Earth, he's a ticking time bomb as soon as he steps foot on our planet. He has to find the girl, use her help to track down his father, and take in as much of Earth's sights as possible before either dying or having to return to Mars. There are worse ideas for a movie.

The problem here is very much in the execution. First off, we don't learn much at all about our protagonist, the Mars kid, whose name is "Gardner" (Asa Butterfield). He's lonely as the only teenager on Mars, sure, but beyond that? Nothing. We don't even learn why or how he started talking to the girl, Tulsa (Britt Robertson). He does eventually find her and they take a road trip - but even that doesn't yield anything beyond the "members of the opposite sex fall in love on a road trip" cliche. Tulsa is the least popular person at her school ... because why? She plays the piano in secret sometimes? She's a foster child? The movie doesn't care about giving us characters that feel like real people or have any depth to them.

It also doesn't give them much to do. They steal a couple of cars and run from place to place, all while being chased down by Gary Oldman and Carla Gugino - who at times are painted as semi-villains because they don't want Gardner to die. The characters just go from place to place, learn where to go next, and then hit the road again. No time for exploration of who they are as people, and no reason for us to care.

If you've seen the trailer, you've seen almost the entire movie - all the relevant bits, anyway.

And if you thought you were going to get by without cliched dialogue, you would be mistaken. I think every second line in The Space Between Us is eye-rollingly terrible - the type of lines that an alien would write if it learned only about our culture through old movies. Hmm. Allan? Alien? I'm just saying.

Asa Butterfield has perhaps never been as bland and disengaged as he is in The Space Between Us. The character doesn't understand social conventions and whatnot, given that he was raised in relative isolation by scientists on Mars, but he's allowed to emote, surely. Britt Robertson seems to care but really needs to start picking projects with more discretion - this is a long string of bad movies she's been in. Gary Oldman shouts a bunch, Carla Gugino is ... there for a bunch of it, and B.D. Wong shows up for a few scenes. I'm not sure why, but he's there.

The Space Between Us is difficult to write about because it's so empty that there's very little to say. If you've seen the trailer, you've seen almost the entire movie - all the relevant bits, anyway. There's a lot of filler, during which a good movie would give us character development - or at least dialogue that doesn't make us spit out our drink in a fit of laughter. But The Space Between Us doesn't have anything. It's a bad teen romance movie, it's a bad movie about an outsider taking in the wonders of Earth, and it's a terrible movie when both of those elements are combined. Almost none of this movie works. It even has ideas that, if explored, had the potential to engage us on an intellectual level - but it isn't interested in doing that. It's a bad YA movie that doesn't have any aspirations to do anything well.

Bottom Line: Like a short story written by a Tumblr 12-year-old, The Space Between Us should probably only be shown to friends and family.

Recommendation: Unless you know somebody directly involved in The Space Between Us's production, you don't have any reason to see it.