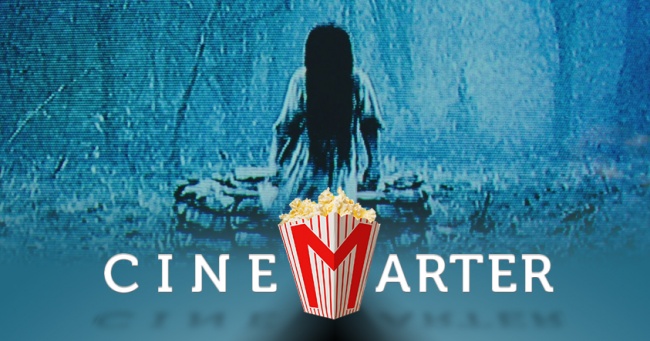 If you were to come up with a sequel to the previous Ring movies set in the present day, what would you base it on? I've thought presenting The Video - for it is important enough to warrant all caps - as a viral internet phenomenon would be the best way to go. I don't know how you write yourself out of that situation (maybe you don't), but it's what I'd use as my hook. After all, almost nobody uses VHS players anymore, so the video that kills you seven days after you watch it realistically shouldn't have made it into the 2010s.

Those of you who have seen the trailer for Rings might assume that the filmmakers agreed with me, took the viral video concept, and ran with it. You'll be disappointed. While that implication is in the trailer, it's not something that the movie actually considers until a point at which it's too late. The actual plot of Rings revolves around a woman running around and trying to figure out more of Samara's back story - after watching The Video, which has been passed around by a university professor as part of his research as to whether or not humans have souls. 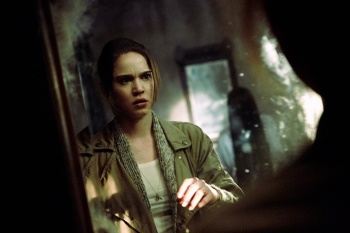 The professor (Johnny Galecki) isn't the villain, though. It's true that he recruits students to watch a tape that will kill them in seven days, but he's learned that, if that student makes a copy and gets someone else to watch it, they'll bypass that whole "dying" aspect. Somebody saw It Follows! (Was that in the original? It might've been; it's been 15 years.) However, Holt (Alex Roe) is the boyfriend of Julia (Matilda Lutz), and after she watches his copy, the file refuses to be copied. Julia has seven days - which the movie doesn't count down for us - to find a way to break the curse.

I'm not sure what the real idea is here. The only character to get any depth or development is Samara, the evil girl from The Video who murders people. The movie almost wants to make her sympathetic - assuming The Ring Two didn't do that for you, of course. But it doesn't want to go all the way with it. She's still evil, she's still the thing we want to avoid seeing, and she's what generates most of the movie's numerous jump startles. You weaken the villain by letting us learn more about her, and you lessen the impact of the scares by weakening the villain.

Rings is a sequel that's coming out a decade too late, and that's usually a bad sign.

We don't have any other characters to hang onto, either. Julia and Holt are both empty vessels that take us from place to place and scare to scare but are otherwise nothing characters. The professor's entire idea is dumb, but it could have led to some interesting philosophical discussions ... that the movie wants nothing to do with and moves away from him as soon as humanly possible. Vincent D'Onofrio shows up midway through but only has two or three scenes, and is mostly there for exposition. And none of the actors do anything more than show up and read their lines, presumably wiping their faces of tears between takes given how clunky some of that dialogue is.

My guess - and I don't have any inside knowledge here - is that Rings was at one point in time a much more ambitious project. It was planned for years after The Ring Two and was eventually shot in 2015 with a planned release date of later that year. Then we waited. And waited. And there were reshoots. Did the studio hack together a semi-intelligible cut and dump it in the first weekend of February in hopes of recouping some of the unthinkably large $25 million budget? I'm not saying that's what happened; I'm just presenting possibilities that make sense - more sense than the movie, that is.

I haven't mentioned much about Rings' attempts at being a horror movie, in large part because there aren't a whole lot of them. It doesn't know how to build atmosphere, its creepy imagery is all just retreads of things we've seen many times before - if you count both the Japanese and American films - and it's filled to the brim with jump startles, which are not scary. They're all telegraphed to the point of worthlessness, and if they do manage to make you react, it's only because a combination of a loud noise and quick on-screen movement is scientifically engineered to make you do so - not because the movie earns it.

Rings is a sequel that's coming out a decade too late, and that's usually a bad sign. This one has two potentially interesting premises, but saves one for the finale and skirts over the other one as quickly as possible. It doesn't do anything remotely scary or creepy, it tries to make its villain sympathetic - but also not - and doesn't have any other characters worth anything. It's pointless, banal, and more likely to put you to sleep than elevate your heart rate.

Bottom Line: Rings is a terrible movie that never should have seen the light of day.

Recommendation: Even ardent fans of the last two films or the Japanese ones will struggle to find anything to enjoy here.