It's really weird to think that something like The LEGO Batman Movie could come from the same studio that makes the live-action Batman movies. This is a movie that spends a not-insignificant portion of its running time making fun of the grimdark Batman that has been gracing our screens ever since Batman Begins. And while the Christopher Nolan trilogy was pretty great - that success hasn't really translated after he left the director's chair. The LEGO Batman Movie posits that, in order for the character to return to greatness, it needs to revert back to being one that embraces both his relationships with other people, and the goofier aspects of his character and various situations.

After The LEGO Movie, it was clear that the LEGO take on Batman (voice of Will Arnett) was going to be something big. After The LEGO Batman Movie, it'll be huge. From moment one, which has Batman breaking the fourth wall and talking about how movies open with a black screen, the studio logos, and ominous music, we're laughing hysterically. That amount of laughter is sustained for the vast majority of its running time, which is a near impossibility. Somehow, it also provides depth, insight, and understanding into the character, and for the first time in a long time makes us care what happens to him and those around him. 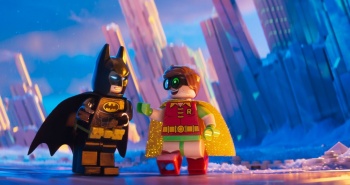 What's the story? It's Batman vs. The Joker (Zach Galifianakis). The difference? Joker isn't - for the most part - trying to take over Gotham; he just wants Batman to acknowledge that they have a hateful relationship. Batman, after being emotionally broken following the deaths of his parents, refuses to do so. Most of the movie goes to great lengths to showcase Batman's isolation - as he's usually shown to be in the recent live-action movies - and makes us acknowledge how much less enjoyable the character is when he's acting this way.

The humor is varied, which is one of the reasons it's able to stay as funny as it is for the entire film. We've got referential humor - much of it focused back toward the sillier parts of the previous movies - puns, satire, self-deprecation, wit, slapstick, and probably a couple of others that I can't even remember because the movie throws so much at you that it's hard to recall specific lines. I can only imagine a second watch would be just as fun - if not more enjoyable - because of this.

The LEGO Batman Movie is one of the best Batman movies ever.

There's also a lot of action - particularly in the final third, when the movie ramps it up a notch - and because it's LEGO, that means it can be pretty much as violent as it wants and still be "family-friendly." The action is creative, engaging, and actually, at times, feels like it has stakes. It earns that because of the way it provides depth to its characters. Not a lot, but enough that we actually care. When was the last time you cared about Batman?

I don't know how much easier or more difficult it is to do the faux-stop-motion animation that's found in The LEGO Movies than traditional 3D animation, but I love it. I love the detail that goes into every frame and the various characters that get modeled and may only show up for a scene or two. You can tell that the filmmakers really care - that they're not (yet) making these movies just because they sell tons of merchandise and have such a large base from which to draw. This one borrows from Warner Bros.' entire catalogue of live-action films - some of which only the adults will understand - but the filmmakers know exactly how to bring these characters to life and make them funny. It'd be easy to throw them in and go "hey, look at these." It's more difficult to do what they've done here: make them matter.

The LEGO Batman Movie is one of the best Batman movies ever, which is pretty incredible given the history of the character. It's hilarious for almost its entire running time, it's action-packed from start to finish, it humanizes Batman and understands him as a character better than almost any other movie - it's one of the first times I remember caring about Batman - and it's beautifully animated, creative, and full of depth, insight, and detail. What an enjoyable movie. Warner Bros. should take note: This is how you make a Batman movie.

Recommendation: If you liked The LEGO Movie or like Batman, go see this movie.