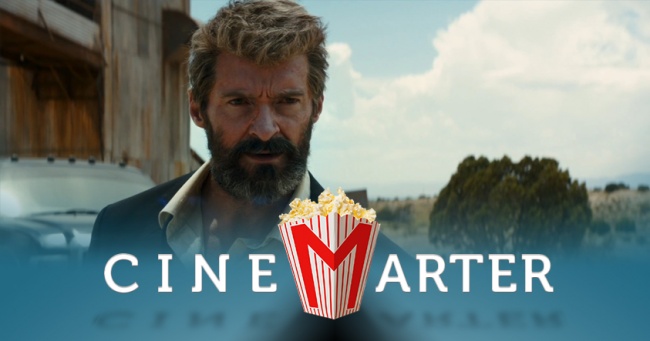 Hugh Jackman has played the X-Men character Wolverine since the year 2000, and has played him eight times - cameos included - prior to Logan. I think that's something that, right off the bat, we need to appreciate. That's a long time to play one character, and it will probably wind up being Jackman's legacy as an actor when all's said and done. It gets cemented here with Logan, which is both a very fitting conclusion to his portrayal of the character, as well as one of the best X-Men films to date.

Logan is set far in the future, in the year 2029, a time in which mutants have almost been entirely wiped off the face of the planet. The man formerly known as Wolverine, Logan (Jackman), is now working as a limo driver, saving up money to both medicate and eventually relocate Charles Xavier (Patrick Stewart), whose brain is in decay. Charles is hiding in Mexico with Caliban (Stephen Merchant), who can sense other mutants. Logan is no longer the man we saw in previous films. He's worn-out, he no longer heals as quickly, easily, or fully as he used to. It takes energy for him to keep out his adamantium claws. He looks like he's slowly, but surely, dying. 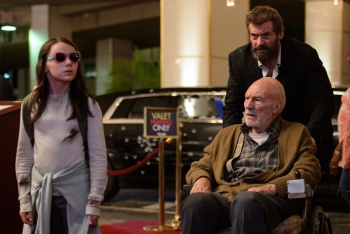 A confluence of events leads to Logan, Charles, and a young girl named Laura (Dafne Keen) on the run from a group of villains led by Donald Pierce (Boyd Holbrook). They want the girl, but Logan has agreed to get the girl to North Dakota, where she hopes to meet up with a whole bunch of other "wanted" kids from Mexico and flee to Canada in order to find safe haven - the movie's only real source of political commentary. Most of Logan is actually a road trip movie. The heroes go from place to place, while the villains are on their tails at every stop.

Logan is not a fun movie. It's tonally more in line with a post-'70s Western. At one point, characters are seen watching the movie Shane - that's not a coincidence; that's the type of mood that director James Mangold is setting here - maybe even a little darker. While previous X-Men films have been flashy, largely light affairs, this one is going very much against that grain. There isn't a ton of action, there aren't many quips, the superpowers are mostly kept to a minimum, and the mood is very much not a happy one. Mutants are nearly extinct, both Charles and Logan are reaching the end of their lives, and even the glimmers of hope the movie offers come with caveats. Failure is much more prominent a theme than success.

As a swansong to the Wolverine character as portrayed by Hugh Jackman, Logan is pretty much perfect.

The action we do get is brutal. You're probably already aware that Logan is rated R, but if you're not: Logan is very definitely rated R. It's bloody, very violent, and relatively profane. I'm not saying kids should be kept away from it, but just know what you're getting into here. Most of the action isn't noteworthy beyond the increased brutality and gore that comes with it - except that the heroes are more often than not better off running away than continuing to fight. Wolverine has never, on film, looked so vulnerable.

It's the first time I've actually found myself caring about characters in the X-Men universe, which makes it a success story on its own - and something that other superhero movies usually can't achieve. I like the MCU movies as much as the next guy, but I can't say I feel much for any of the characters within it. Logan, meanwhile, manages to make us care about all three of its protagonists. It makes sense for Logan and Charles - we've been with them for 17 years and with both actors saying they're probably done after this film, this is goodbye to, at the very least, their portrayals. But Logan even does a good job when it comes to Laura.

A lot of that credit has to go to Dafne Keen, who in promotional pictures and clips appears to have approximately one facial expression. And for about half of Logan, that remains true. Then, midway through, The character grows and the actor adapts - and delivers a wonderful performance. Jackman and Stewart, meanwhile, would not be undeserving of Oscar nominations. This is easily better than the performance Jackman was nominated for, and it's crazy to think Stewart doesn't have any Oscar nominations. The amount of depth shown by both actors here is almost unparalleled in superhero movies. Jackman, for the first time in the franchise acting more with his face than his body, and Stewart getting to show us a new side to the previously unflappable Charles.

As a swansong to the Wolverine character as portrayed by Hugh Jackman, Logan is pretty much perfect. It immediately separates itself from most other superhero movies - and especially the other X-Men films - with a different tone, style, setting, and purpose. It's not looking for easy entertainment - and, in fact, might not even be that "entertaining" in the traditional sense. It's an emotional ride, one that isn't a lot of fun - but that's all the more fitting. Logan will go down in history as one of the best X-Men movies, one of the best road trip movies, and maybe - just maybe - one of the best superhero movies.

Bottom Line: A fantastic farewell to Hugh Jackman as Wolverine, and a really great movie on its own, Logan deserves all the accolades being bestowed upon it.

Recommendation: If you have any interest in the X-Men saga, superhero movies, or Westerns, you should watch Logan.