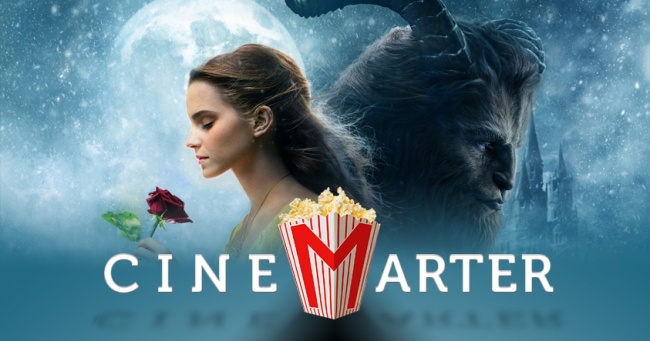 The new version of Beauty and the Beast takes 129 minutes to deliver the character growth, plot depth, and romance of a romantic comedy - but without the laughs. This is a remake of the 1991 animated Disney film, which is often considered one of the greatest animated Disney films, and is the latest in an attempt to translate old animated Disney films to live-action. The previous attempts - Alice in Wonderland, Maleficent, Cinderella, The Jungle Book - all did things to differentiate themselves from the originals. They weren't always successful changes and they haven't all resulted in better movies, but the ambition was there. All this new Beauty and the Beast does is increase the running time by more than 40 minutes.

In case you're somehow unaware, Beauty and the Beast tells the story of an ordinary girl who winds up being captured in a castle by a prince turned into a Beast by an evil spell, and they eventually fall in love despite their differences. The girl's name is Belle (Emma Watson), because the movie takes place in France and "Belle" means "beautiful" in French. The Beast (Dan Stevens) only has a set amount of time to fall in requited love, or he'll be stuck like this forever. Meanwhile, a man named Gaston (Luke Evans) has been pining after Belle for quite some time. Why? Because she's The Special. After all, the movie's opening song informs us of such. And she can read! 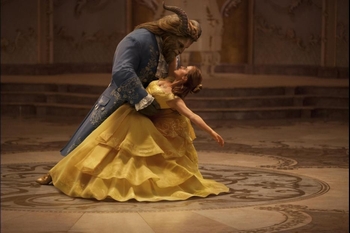 So, Belle winds up prisoner to Beast and they eventually begin a friendship that will probably turn into a romance. With the man who is keeping her as a prisoner. I've been told that, since there's no abuse - except for an occasional angry temper tantrum that scares her - it's not technically Stockholm Syndrome, but it's the next closest thing. This was a problem with the original, too, and you'd think it might get addressed with an extra 40 minutes of screen time in the remake. After all, a couple of other minor issues get fixed. But, no, it doesn't even come up.

Another thing that doesn't make much of an appearance: any tension between Belle and Beast. As such, there's no doubt where the movie will take the characters; their paths seem way too predetermined. We know exactly where they'll end up even without having seen the '91 version. Even if Disney didn't want to switch up much of the plot, making us think that it's a possibility would have gone a long way.

Part of the issue also stems from how dull both Belle and Beast are. Belle gets a whole song about how special and interesting she is right off the bat, and it's followed up by showing us that she very much isn't. Beast mopes and then doesn't mope, so I guess that's enough character development to fill 129 minutes.

The reason one should want to see this movie is to see nostalgia brought to live action, and to see the spectacle of some of the musical numbers done with a budget several times larger than the animated film. Nostalgia can make even mediocre projects seem better than they are, and it's far too personal to make much of a comment on. The spectacle, however, is another area in which the film falters.

The new Beauty and the Beast is a remake that serves very little purpose except to give everyone a hit of nostalgia and remind us all how great the 1991 version is.

The one highlight of the new Beauty and the Beast is "Be Our Guest," which is visually arresting. It's colorful, packed with action and movement ... and also makes you wonder where all that life is for the rest of the movie. The majority of the film is drab and flat. Even the opening scene, which might be the most complex of the musical numbers, fails to pop like it should. The castle has been darkened by the curse, sure, but even in the iconic ballroom scene, it doesn't generate any feeling. If the 1991 film was magic, this one is magic's second cousin, twice removed.

Emma Watson was a poor choice to play Belle. Whether it's because of the large amount of CGI or because of poor direction, she didn't have one emotion in the film that rang true or was believable. Her character's pretty thin, but even the wonder at the CGI servants or initial fear of Beast feels hollow and unnatural - like when you can sense someone's lying to you. Dan Stevens doesn't get to emote much underneath the Beast CGI. That's more fitting of his character - at least in the beginning - but he never gets out of that phase. The (primarily) vocal supporting cast is strong - there's good work from Ewan McGregor and Ian McKellan, especially.

I have a few other nitpicks. The entire thing takes place in France, but only a couple of characters have French accents. If none of them did, the accents are implied - the film is "filtering" them for the audience. But when just a few do, it makes it really weird. The ending also feels like it betrays its internal logic, but I guess when it's a fairy tale and magic gets involved, logic can go out the window. And the fight scene near the end is terrible - it's hard to imagine it came from Bill Condon, the man who delivered us the great battle at the end of Twilight: Breaking Dawn - Part 2.

The new Beauty and the Beast is a remake that serves very little purpose except to give everyone a hit of nostalgia and remind us all how great the 1991 version is. In an unforgivable 129 minutes, this movie gives us weak characters, an uninteresting plot, and it can't even produce much of a spectacle when it comes to the musical numbers. It doesn't do anything better than animated version, also does several things far worse, and it doesn't change enough to justify its existence. What a waste.

Bottom Line: Slightly better than a disaster, the new Beauty and the Beast does not even come close to living up to the 1991 version.

Recommendation: Skip it, stay home, and re-watch the animated version.