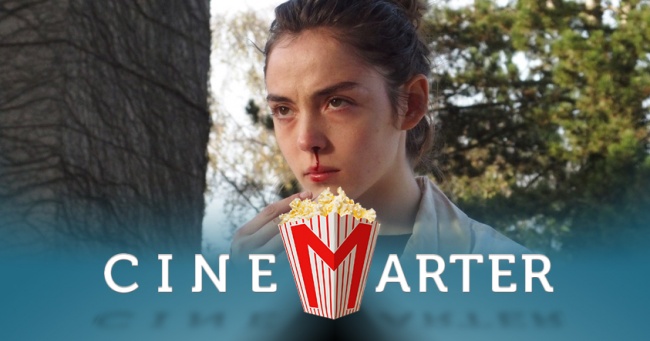 The movie that I kept thinking about while watching Raw was 2000's Ginger Snaps. Both are horror movies revolving around a couple of sisters as they discover that their bodies are betraying them and turning them into different types of creatures - used as a metaphor to explain something that women go through in their lives. Ginger Snaps had werewolves; Raw has cannibals. Ginger Snaps took place in high school and used its transformation as a puberty metaphor. Raw is in college and uses cannibalism for, well, potentially quite a lot, depending on how you look at it. In some respects, Raw is Ginger Snaps all grown up.

Our protagonist is Justine (Garance Marillier), a long-term vegetarian who is just starting veterinary school. A hazing prank involves eating meat, something that she initially refuses to do until she's egged on by her older sister, Alexia (Ella Rumpf). This awakens in her a desire for meat - and not just from animals. She wants human meat. It doesn't even have to be cooked. While making this shocking discovery, she also finds herself navigating the increasingly complex world of college, which even for those who don't want to eat their fellow students' flesh can be a difficult experience.

So, you've got a previously sheltered young adult who now both gets to navigate the world with freedom in an environment tailor-made to expose those who wish to all sorts of "freedom," alongside a new-found cannibalistic nature. That's a good premise for a movie, and here it's been strongly executed by writer-director Julia Ducournau, who makes her feature-film debut.

The narrative throws a couple of twists and surprising revelations at us, and even makes the "what's happening with Justine?" central mystery relatively engaging - even if it's not a stunner or much of a secret to the audience. We basically just watch her try to figure it out, and it works. That's largely because it's not the only thing happening in her life - the college experience takes up a significant portion of her time, too, and the various activities in which she partakes - fueled or impacted by this growing desire for flesh - keeps us engaged.

Raw is a bloody, often disgusting, and always fascinating look at both the life of a college student who finally gets to enjoy the freedom that comes with adulthood ... and also what happens if that same college student subsequently gets a desire for human flesh.

And then we get to the horror portion of Raw. This isn't a movie that hopes to make you leap out of your seat when nothing happens by throwing a multitude of jump startles your way. It instead wants to cause a deep, unsettling feeling in your gut as it shows you, well, probably more or less exactly what you expect. Is there a pleasant way to show someone eating another person's raw flesh? If there is, Raw doesn't want to go there. It would ruin the effect. When Raw decides to get gross, it gets really gross - and it most definitely has the potential to make you feel uneasy.

That feeling of unease isn't just because it's unpleasant to watch people get eaten, either. Raw does a good enough job of establishing Justine as a character - and to a lesser extent, Alexia - that you worry about where this condition will lead her. You actually begin to care about the cannibal, which is certainly different. It works because the film made her into a person before afflicted with this condition.

It also works because of how well Garance Marillier plays the lead role. As she starts college, she's this fresh-faced, eyes-wide-open girl who just wants to work hard and save some animals. The transformation she undergoes is dramatic and the way she portrays the changes in the character is fantastic. She sells us on it - and has to do some less-than-pleasant things to do so. Ella Rumpf is a lot more fun in the supporting role as Alexia - that doesn't make the performance better, but the more outgoing character (especially early on) is going to be more immediately entertaining.

Raw is a bloody, often disgusting, and always fascinating look at both the life of a college student who finally gets to enjoy the freedom that comes with adulthood ... and also what happens if that same college student subsequently gets a desire for human flesh. It's an intriguing movie with a strong plot, great acting, just enough gross-out horror, and lots of symbolism and metaphor to ensure that we're not watching it brain-dead. Raw is great.

Bottom Line: Raw takes an interesting idea and runs with it, turing it into a great horror movie.

Recommendation: If you can stomach it, and don't mind reading subtitles, Raw is absolutely worth watching.