This television-quality web series will arrive on Hulu and YouTube June 4th.

Geek & Sundry - an online production company founded by geek luminary Felicia Day (The Guild, Supernatural) - has a great track record with online entertainment, with web series like Wil Wheaton-helmed Tabletop and superhero comedy Caper. Joining the lineup this coming week is Spooked, a paranormal comedy that's brought to us by Bad Hat Harry and Geek & Sundry, produced by Bryan Singer and Felicia Day.

The series - which can be found on Hulu and YouTube starting June 4th (1PM ET/10AM PT) - takes viewers out on adventures with the distinctly non-professional Paranormal Investigation Team (or P.I.T.). Starring Julian Curtis (Captured), Ashley Johnson (The Avengers), Neil Grayston (Eureka), Derek Mio (Greek) and Shyloh Oostwald (In Time), the cast brings solid performances to the small screen from the very first episode. In our preview of the series, we were impressed not only by the acting, but also great writing, high production values, and a delightful mix of scary, funny, and heartwarming moments. Spooked definitely sets a high bar for a web series, matching the television-quality shows viewers might see if they clicked elsewhere on Hulu or, to a lesser extent, YouTube. In fact, we enjoyed the first episodes so much that we're a little disappointed season one only will only comprise four episodes of 22 minutes each. 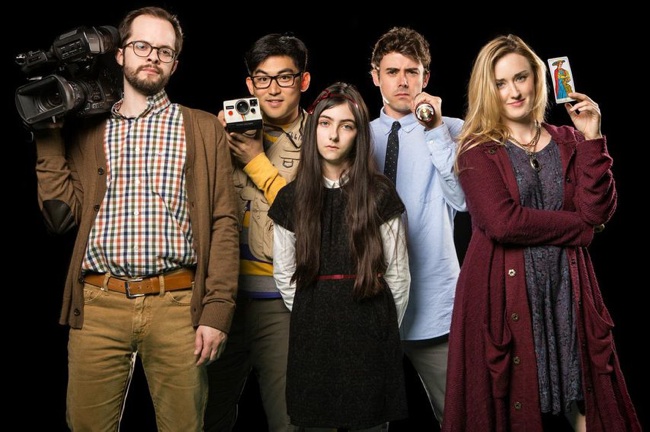 When we meet the P.I.T. team, they're not very much of a team: each of the five main cast members have highly different approaches to the task of ghost hunting, which inevitably leads to personality clashes. Connor (Curtis) is ostensibly the leader, having founded P.I.T. as a way to help his younger sister Piper (Oostwald) who doesn't talk... except to ghosts. The obvious solution - at least to Connor - is to investigate the paranormal in order to encourage her social interaction (at least with the dead). Joining Connor's crew are spiritualist Morgan (Johnson), skeptic Lindsey (Grayston), and geeky ghost hunter Eliot (Mio). The group travels around in an RV - complete with rather low-budget Paranormal Investigation Team banners - from case to case.

It's a kooky concept, we have to admit, but the ensemble pulls it together in a way that makes the complicated balancing act of making good TV look easy. The show's scares are genuine - if sometimes a bit predictable, since they parody and play off of standard supernatural tropes - but they're never allowed to last for long as there's always a laugh or heartwarming moment just around the corner. Inevitably, the tension is broken - by Lindsey making a snide comment about the supernatural, Eliot failing terribly at flirting with Morgan, or Piper communicating with ghosts in particularly unique ways - before it has a chance to build to actual terror. In the first episode, the team is on the hunt for a ghost and the show segues from a silly seance segue directly to a tender moment between Connor and their client, Carol, whose father seems to be haunting the house. The idea of a ghost doesn't bother Carol, but, she admits to Connor, the idea of her father haunting the house disquiets her: "That's what's unbearable, that he might be in pain."

The show is full of leaps like this, making jumps from comic to serious, from terrifying to sweet. The end result? The show constantly keeps you guessing... and keeps you from getting bored.

The real core of the show, however, is the dynamics of the oddball team. Each of them are here for different reasons: Connor wants to help his sister, Lindsey wants the chance to record a scientific breakthrough, Eliot wants Morgan to respond to his awkward flirting. No one quite gets along, and watching the team clash even as they try their best to work together makes for lots of laughs and some darned good television... even if you're just watching it on your computer screen.

Fortunately, this mismatched team seems to have luck on their side, and when their first case ends in success, they all seem committed to their newfound camaraderie. "Giving up my professional gaming career for this was the best decision ever," enthuses Eliot before the credits roll.

Definitely, Eliot. This makes for much better TV.

You can catch Spooked for yourself online starting June 4th, with new episodes every Wednesday in June at 1PM ET/10AM PT.