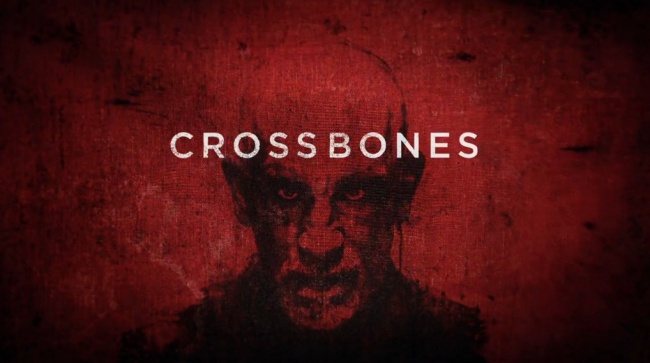 Not even Malkolvich'ing like a boss can save this mediocre tale of scheming pirate kings, action-hero British spies and comedy-relief monkey boys.

The legend of Blackbeard is generally well known. Edward Teach was the terror of the West Indies and Eastern American colonies in the early 1700s, relying on his fearsome reputation to threaten others rather than outright violence. In NBC's romanticized version, Blackbeard has a white beard, but uses his wits more than his fist to get his way. He also sees ghosts, indulges in acupuncture and may be set up to be double crossed by his own people. 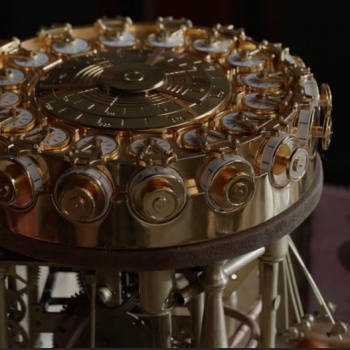 To make an actual story out of it, a magical device of advanced technology has been devised that will allow any ship at sea to determine its exact location. How this is supposed to wipe out piracy, I'll never know. Only ships that stray off course get ransacked by pirates? Anyway, this bit of McGuffinry is placed on a ship, along with its inventor, his encrypted notes on how to build it and the key to breaking the code. Basically all the eggs in one basket with a big target painted on it - you'd think the mastermind who planned this would at least hold back one part so as not to lose it all if the mission goes sour, but you'd be wrong.

Blackbeard's pirates predictably board the ship in search of the device, but who is there to save they day? Why the ship's surgeon, of course. As you might imagine, he isn't really a surgeon, but a British spy that apparently has any skill that may pose as a credible cover. He takes down many a pirate on his way to the cabin holding the one device that will make or break Blackbeard's operations. Once inside he destroys the device, burns the instruction book and poisons the inventor. And then gets captured by the pirates.

Of course, this is all part of the plan. A flashback shows us that the Governor of Jamaica has placed this device on the ship explicitly to draw out Blackbeard. The true mission of our faux-surgeon, Mr. Lowe, is not to protect the device so much as to kill Blackbeard himself. Still, if the device does what it is designed to do, was it smart to put the only working prototype, the inventor, the inventor's encrypted notes AND the encryption cypher all on the same ship?? No wonder they can't get it together long enough to deal with Blackbeard, they can barely work out their own trap.

At least they have a quick thinking man of action in the form of Mr. Lowe, who is devoted to serving the Crown and fulfilling his mission. And that leads him to flirting with the beautiful and intelligent right-hand woman on Blackbeard's island domain, Kate Balfour, who is responsible for cataloguing the haul off the captured British ship. She is also married to a cripple, so she must be fair game, right? The show drops a few hints in that direction.

We then get our first glimpse of Blackbeard (almost twelve minutes into the show!) He introduces himself to Lowe by slitting the throat of a captured British sailor. And this is where I have to laugh. This show desperately wants to compete with the limit-pushing sex and violence of basic cable shows, but it is still a broadcast network series. So while we do see the throat being split and blood beginning to spurt from the wound, the shot only lasts a split second. This is no Spartacus where blood pumped so furiously from gaping wounds that the splatter obscured the camera lens. Nice try, NBC, but either embrace the disturbing violence like you have with Hannibal or just stick to the bloodless violence you and the other big networks are known for. 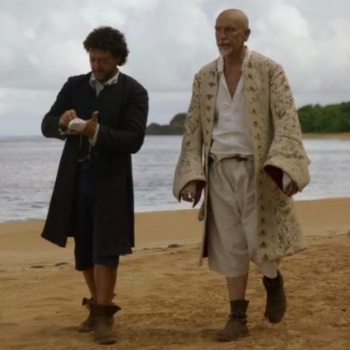 Lowe and Blackbeard debate the intentions of the British Crown, the role of God in the universe and the values of Christianity. You know, pirate stuff. All joking aside, we see that they are both very quick thinking men who also have deep philosophical differences. This scene was well written and executed, showing that these men are intellectual equals though their morals are very far apart. Finally we cut to the chase. Blackbeard is keeping Lowe alive to keep the device's inventor alive.

Blackbeard also hedges his bet by asking yet another lovely young associate of his, Salima, to try to decipher the instructions for building the device since they weren't quite destroyed in the fire set by Lowe on the ship. Lowe stalls for time, but the inventor dies. Before Lowe can be hauled in front of Blackbeard and killed, he finds a cloth on the body of the inventor with the decryption key for the book. Honestly.

Sigh. He quickly memorizes it and then burns it. Now Blackbeard still needs him.