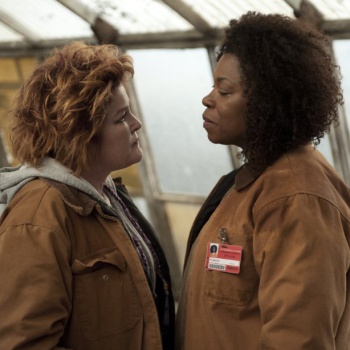 After binging our way through season 2 of Netflix's OItNB, we're happy to report that the show doesn't disappoint.

Orange Is the New Black doesn't need Piper. Sure, the series is based on a book her real life counter-part wrote, but her storylines and scenes are arguably the weakest in the series. Sure, there are great moments like flaming bags of poop and fantastic chemistry with Laura Prepon's Alex Vauss, but Taylor Schilling's character doesn't motivate the same emotional response viewers get from the other thirty or so characters. The writers seem to get this, because while Piper does have a couple season-long arcs, the dominating storylines revolve around the other inmates at Litchfield Women's Prison.

One of Litchfield's new inmates is Vee, a drug kingpin and maternal figure from Taystee's past who sets to work immediately in the prison to recruit the black women into a new smuggling operation. She is smart, dangerous, and manipulative, and while it is apparent that she has malicious intentions, the revelations of how wicked she can be are slowly revealed throughout the season. She shows kindness to Suzanne ("Crazy Eyes"), but this is only because she knows how loyal the mentally disturbed woman will be. Vee, determined to recruit Taystee into her operation, turns her against her best friend Poussey, who increasingly becomes isolated and scared. When she drunkenly confronts Vee she is beaten by Suzanne as Taystee watches in one of the most heartbreaking scenes in the season. 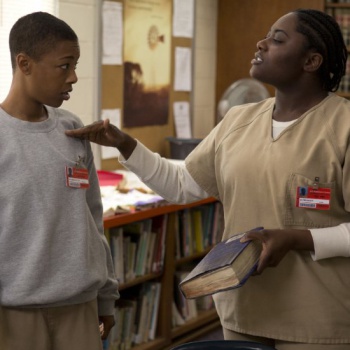 Poussey is also likely the new fan-favorite. She respects that her romantic feelings for Taystee aren't reciprocated, she's committed to her beliefs, and of course her background is sad, as she was forced apart from the woman she loved due to homophobia. Vee intends to return the black population of the prison to their position of power. This is not her first stay at Litchfield, previously she had inspired Red to take over the kitchen to start her smuggling set-up and had Red severely beaten when she refused to give the operation to the black women. This pattern is consistent with Vee, who tried to get Poussey to sell her prison-made liquor and, before returning to Litchfield, had one of her "adoptive" sons and employee RJ killed for trying to move out to start his own drug dealing. Vee is vicious and if she wants something, she will do whatever it takes to get it. After starting with cigarettes, her crew begins selling hard drugs and a free sample is given to wild-haired Nicky after Vee hears her discuss how much she misses heroin at a Narcotics Anonymous meeting.

Red, the former head of the kitchen and all smuggling at Litchfield, starts the season preparing to deal with Vee and creating a new smuggling operation in a greenhouse after finding a sewer tunnel. She starts with the Golden Girls, a group of older inmates that take her in when she has nothing early in the season. Before long, Red discovers a way to bring contraband into the prison and rebuilds her family, and Nicky comes to her to give her the free drugs she had rather than start using again. Big Boo, feeling slighted by Red and wanting in on Vee's drug and cigarette business, tells Vee how Red is smuggling, but Vee won't take her in because she doesn't like snitches. When Big Boo is frozen out of Red's circle, it's a statement about the series. In Orange Is the New Black, loss doesn't come from death or torture like in Game of Thrones or Breaking Bad. The consequences in this show are not having access to companionship or maybe a chance at half a candy bar. At times the absurdness of what is important to these women is a joke, but it is also the statement of what is important in this world and what is at stake.