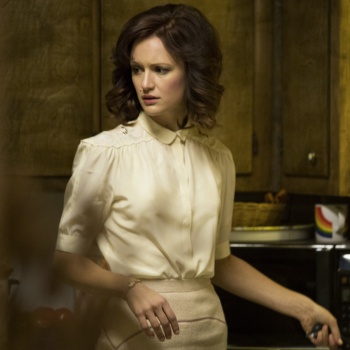 Donna, John, and other supporting cast members steal the show from the main characters this week.

Halt and Catch Fire reminds me of nothing so much as the line in The Avengers where Bruce Banner tells everyone "We're not a team, we're a time bomb." I just can't shake that line from my head when watching Joe's dysfunctional team trying -- without much success, so far -- to put together their own clone of an IBM PC. Who would have thought to put these characters in a room together, much less task them with working collaboratively to accomplish a goal?

The only saving grace the HCF team has is that at least if they fail the whole world's not on the line... and we can enjoy marveling at their drama in the meanwhile. Last week, we saw everyone take their first steps towards working together, which involved a lot of seemingly unnecessary shouting -- but building a PC clone is high-stakes business, and with their jobs on the line, everyone's under a lot of stress. The result was a muddle of an episode where characters seemed to bounce from one extreme to another, reality TV style.

Fortunately, this week's offering was better -- due in large part to strong performances by the show's supporting cast, who helped round out the craziness of the Joe/Gordon/Cameron triumvirate. The conflict between the main characters is minimized this episode, as they hardly interact -- Cameron's isolating himself, Joe's busy trying to line up new funding, and Gordon's hard at work on the PC hardware -- which means we get to see all of them interacting with secondary characters we haven't seen much of before. Taking a moment to step back from Joe's plan to spend some time with Donna in the kitchen or some time with John in his office gives the show some breathing room that it doesn't have when it runs the entire duration at the breakneck pace of Joe's maneuvering. This week's episode was solidly good television and sets the stage for more participation by the show's ensemble cast... which, as much as I enjoy watching Lee Pace monopolize the camera, is a good thing.

If you haven't caught this week's episode, you can watch it online at AMC's website -- or tune in to AMC on Sunday at 10/9c to catch the latest live. Now, on to talk about episode 3 in depth.

We're greeted by each of our main characters going through their morning routine. Gordon is carpooling into the office with a coworker, Cameron is woken up by janitors vacuuming, and Joe is... naked in his apartment, looking over several computers to a decidedly 80s soundtrack. Why is Joe naked? It's probably better not to ask, just to take what limited enjoyment can be had from Lee Pace's darkened silhouette.

At the office, corners are starting to be cut: the day starts out with Gordon attempting to fire a soon-to-be-former co-worker. "It's not your fault. It's no one's fault," he explains. But we know -- and Gordon knows, too -- that it's kind of his fault. Meanwhile, Joe is berating the remaining engineers by complaining that a 28-pound computer isn't portable enough. In this episode's dose of Joe randomly destroying things, he kicks a bulky computer off a table. Maybe this proves his point that computers are too large: if it were smaller, it would have been harder to kick. Or maybe Joe just likes breaking things, which is becoming a strong possibility. 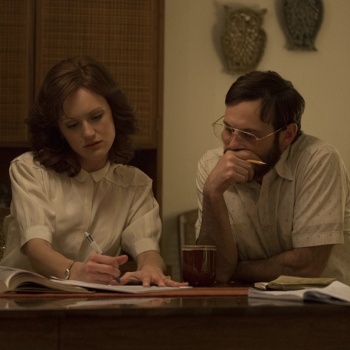 Joe waves a briefcase in front of the assembled workers, explaining they're aiming for no more than 15 pounds -- which everyone says is impossible. "It's ambitious," he counters. No one in the room is happy and bickering about their recently-fired coworkers ensues. They do eventually start working together in space they dub "the kill room," figuring they're either going to wind up killing themselves or killing one another in order to make this work. They work into the night, with Gordon and his carpooling buddy calling it a day well after dark. Gordon's coworker is the team's negative Nancy, suggesting they can't make this work with the time and resources they have -- and Gordon finally agrees.

However, at home Gordon continues working on the problem while sitting at the kitchen table with his wife, Donna. Though Donna hasn't gotten much attention so far, she's not just another clueless woman, as all of the women at the Cardiff offices seem to be -- she worked with Gordon on his last computer project and is currently working at Texas Instruments. And she proves instrumental here when she looks over Gordon's designs and, attacking them with a pen, comes up with a solution. Hey, maybe if they'd let a woman into their design room they could have figured this out earlier instead of declaring it impossible!

Though when Gordon presents the idea to the team the following morning, Donna gets no credit -- Gordon says he came up with it at his kitchen table. But still, this bit of brilliance on Donna's part opens the door for her to be a more central character as the show moves forward. However, despite this breakthrough, the resident negative Nancy rears his head again, saying there's no way they'll be able to mass produce a completely unique type of board. Gordon, who seems to have nothing in the way of a backbone, agrees and says he'll talk to Joe. But when he goes to Joe's office he only lingers outside before turning around and marching back... the first sign that Gordon is maybe, just maybe coming into his own.