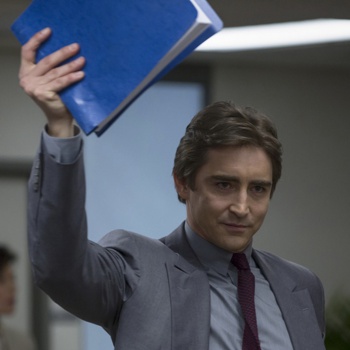 Joe pulls off his most elaborate deception yet on the Cardiff Electric team.

Last week, we saw more of some of the show's supporting cast with Donna and John, and this week we got to see a lot more of Donna in action as she's called in to solve a crisis at Cardiff. If you'll remember, Donna's also the one who gave Gordon the idea that made their PC's motherboard work... not that she's gotten any credit for it so far. Joe also rose to new heights of asshole by sleeping with an investor's boyfriend -- spoiler alert, it's doubtful anyone actually slept -- in order to sink what he felt was an unfavorable business deal.

So what will Joe destroy in this episode? Actually, basically everything. The entirety of episode 4 is drama designed by Joe -- more so than the entire show's drama is designed by Joe -- calculated to get Cardiff some attention. Also on display is rampant sexism and lots of unnecessary shouting -- because, remember, kids, this is a high-stakes drama! Someone could get fired if things go wrong! The entertainment values here are pretty good -- the drama is convincing right up until it's unraveled -- but the parade of people giving Cameron and Donna shit is just exhausting to watch. Cant any of these people be nice to one another for an hour-long stretch? It just reinforces the fact that most of the show's characters are jerks and you don't want to see them succeed so much as you want to see them get beaten into the dirt... which also happens this episode. So there's that.

If you haven't caught this week's episode, you can watch it online at AMC's website -- or tune in to AMC on Sunday at 10/9c to catch the latest live. Now, let's dive into the sexist mire of this episode.

Yhe halls of Cardiff Electric are abuzz because their PC in progress has cleared an important hurdle: the Doherty threshold. This means the machine responds to commands quickly enough that a user's attention won't stray from their screen while the system takes time to process a command -- or, more precisely, that you're glued to your screen. "Once assembled, it will not only be faster than all the other PCs on the market, it will also be addictive," Joe says gleefully. And Joe is nearly manic during the first half of the episode, seemingly high on his own success. I originally thought this was the first sign of genuine good cheer we'd seen from Joe this season... but considering how the episode ended, ithe happiness -- and his subsequent unhappiness -- could have all been an act.

Kicking off his orchestrated drama, Joe grabs the blue binder that contains their reverse-engineered IBM BIOS and throws it in a trash can, douses it in lighter fluid, and tosses in a match. (Apparently fire alarms weren't very good in the 80s, because this isn't a problem.) Watching on television, the viewer knows that because the BIOS code has been burned, we're going to need it later in the episode but none of the players in Joe's little drama see it that way, responding with excitement to his little show.

With the setup a success, Joe moves on to the next stage of his plan, bothering one of the secretaries to get Cameron out of the office. The goal, Joe says, is to get Cameron to take a shower and also to get the janitorial staff in Cameron's filthy office while she's not there to send them away. There's going to be a journalist in the office today, and it's important they give the right impression -- though, of course, Joe sends someone else to manage this because he knows he'd wind up walking away with a black eye.

Unfortunately, while Cameron's out, the janitor's plugged the vacuum cleaner into the same socket as her computer, causing a power surge -- all of Cameron's work is gone and when she returns to her desk with freshly-washed hair, she goes into meltdown mode. Cameron shouts at the janitor for supposedly ruining her work while Gordon shouts at -- and, before Joe pulls him away -- looks like he's going to hit Cameron because her backup disks are ruined.

Cameron's gone from being angry with everyone around her to being near tears that a project she didn't even seem interested in a few weeks ago might have crashed and burned. It's more emotional depth than we've seen from her before, but the characterization is a bit puzzling. And it gets even more puzzling, later, when it's let slip that Gordon's called her white trash and she looks genuinely hurt. On one hand, it's baffling that she should act this way around everyone and expect any other reaction... and on the other, it seems like lazy character writing to make one of the show's two leading ladies to be the cliche tough on the outside, soft on the inside character.