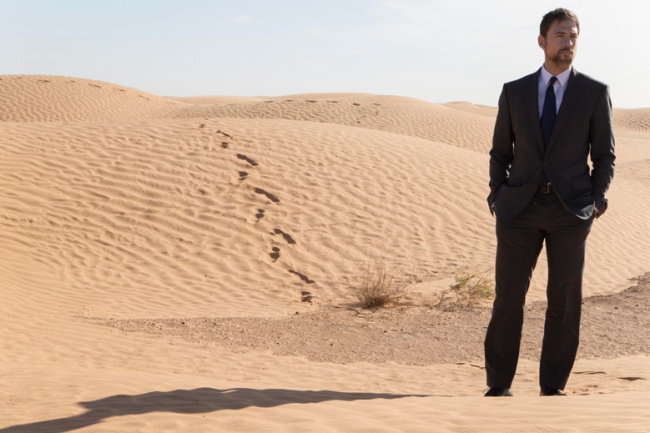 Can this Middle Eastern version of The Godfather grow beyond a collection stereotypes and one-sided characters?

A corrupt family is throwing a wedding, and the patriarch's youngest son, a civilian who doesn't really want to get involved in the family business, is bringing his all-American gal to the party. The patriarch ends up in the hospital; the older son ends up out of the picture; and the youngest son (surprise!) ends up reluctantly running the family. No, this is not a reductive synopsis of The Godfather -- I'm talking about FX's new original series Tyrant.

If you want to catch the series yourself, it airs on FX Tuesdays at 10pm -- or you can watch it online on FX or Hulu, provided you log in with your cable provider first.

Before we get into the show, it should be noted that Tyrant is filmed beautifully. Palace vistas, long shots of the LA River, even an empty airplane cabin are all masterfully captured with vibrant color and opulence. Where the cinematography truly excels is in subtext. Just like the airplane, the palace is empty, as well as the LA River. These long, beautiful shots evoke the notion that opulence is a lonely endeavor, and the price for such majesty is worse than one can imagine... or at least as worse than one is letting himself believe.

That "one" is Bassad Al Fayeed (not to be confused with real-life Syrian President Bashar al-Assad, who he resembles in some ways), the youngest son of Kahled Fayeed, the dictator of a small, fictional Middle Eastern nation called Abbudin. Bassad (Barry, his American nickname) left his country and family when he was sixteen, escaping to that magical place where all beautiful people (and, by the way, he is quite beautiful) go to escape their pasts: Los Angeles. He's a pediatrician in a beautiful home that could be in Pasadena. He's created a beautiful life for himself with a blond wife and two kids who reek of LA privilege and luster. At one point, Sammy, Barry's son, actually says, "Who even takes the 405?" As far as privileged yet troubled LA families with a conflicted patriarch are concerned, the Donovans in Showtime's Ray Donovan do a much better job at pretending to exist.

It's been twenty years since Barry's been back home, and now that his nephew is getting married, it's time for him to leave Los Angeles. We're given clues his trip will be disastrous from the very beginning, the largest being a few quick shots of Pasadena's famed Suicide Bridge. The bridge, menacing in its height and scale, appears when a phone call from back home interrupts Barry's morning jog, a sure sign things are about to get worse. Just as Barry is doing one last healthy thing for himself, the past literally calls him as a bridge famous for death looms in the background. Barry is reluctant when asked to return home for a wedding, but, family is family, and obligation is the hallmark of family, so, taking the plane his father has made sure is empty by purchasing all the other seats, Barry and his clan of LA suburbanites head east. 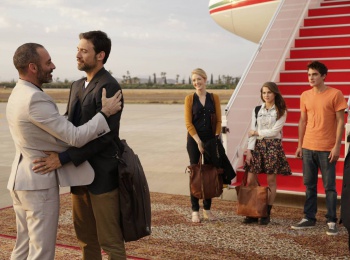 And now we meet Jamal, Barry's older brother and the father of the groom. Jamal, if we're sticking with The Godfather model, is Sonny Corleone. That is, Sonny Corleone mixed with a huge dose of Uday Hussein, who Jamal is probably actually based on. Our first encounter with Jamal is a sexual assault he's perpetrating on a woman whose husband and children are in the hall, waiting for the rape to be over. From the beginning, it's clear Jamal is a just an awful human being.

Life at the palace is complicated for Barry. He doesn't want to stay there, having made hotel reservations, but his family, especially Sammy, wants to bask in the stereotypical luxuries of a wealthy Middle East. Not unlike the second, and horrible, Sex and the City movie, these white Americans are treated to multiple cars, sweeping landscapes, and tourmaline pools. Even Barry's mother, an Englishwoman meant to add a bit of false sophistication to Kahled's demeanor, wants them to stay.