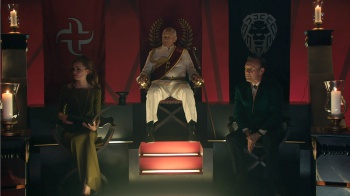 Their Chosen One is acting like a child throwing a tantrum, their leader is having a secret rendezvous with an angel, their schemer keeps being out-schemed, and their villain could be replaced with a cardboard cutout.

If you missed the last episode of Dominion, it's completely fine, because the first sixty seconds or so of this episode recaps each of the many major plot points of the last episode. Mostly this serves to make you regret that you had to watch all 90 minutes of the premiere episode to get this information when you could have gotten it in this quick recap. Argh!

Again, this episode is packed with an abundance of backstory, lots of pointless jargon, and more scifi tropes than should be allowed to fit in a single hour of television. While some of the characters have moments of inconsistency -- Claire and her father both do an about face on the leadership of Vega, conniving Consul Whele is shocked by what he really should have seen coming -- there are some plot elements that could bloom into an interesting story... if not a particularly original one.

In fairness, Dominion is gorgeously shot with plenty of eye candy, so if you're looking for a supernatural drama that won't challenge you to think too hard, it's not bad choice. (And, honestly, the show would make for some fantastic drinking games.) Anthony Stewart Head plays an excellent villain (complete with American accent) in Consul Whele, and the highlight of the episode was a conversation in which Whele admitted that before the war he'd been a televangelist -- a bit of information that really made the way Head is playing the character click. There are some fun moments here and even a couple of surprises... if you can overlook the rest.

You can catch episodes of Dominion on SyFy Thursdays at 9/8c, but you can also watch full episodes on SyFy.com (with a participating cable provider). Now, let's dig into this week's episode.

We open with Alex watching his father's funeral from a distance while having nostalgic flashbacks to fighting angels with Jeep when he was younger. The flashback ends with Jeep telling Alex he'll never leave him -- and we know how that worked out. Surprise: Alex has some daddy issues... and the whole Chosen One thing isn't helping, either. He drunkenly barges in to see Claire, saying they should leave the city now, but Claire repeats last episode's argument, saying they can't leave with the city in distress. Alex retorts by saying Claire's a spoiled princess who lives in a tower and isn't affected by the attacks -- at least he's not a hypocrite. Now that's sure to win your girl back, Alex. Surprising no one, Claire tells him to get out.

In politics this week, all of Vega's senators are unhappy with Whele bringing an angel into the city last episode, and there's much argument over the matter in the senate chambers. "I am the first to admit I had a lapse in judgement, but I was doing it for Vega," he tries to explain, going on to say that the angel was found inside the city walls. That doesn't line up with what he was saying last episode, but there's no surprise that Whele is trying to spin this to paint him in the best possible light. It's Riesen who pulls him out of the fire with the suggestion that the city has more important things to worry about.

We don't yet know why Riesen, who's a dictator but seems at least be a modestly benevolent one, is sticking with a conniving scoundrel like Whele. But when Riesen visits Whele later to call him out on the act he gave to the senate, he admits he needs someone with Whele's bureaucratic skills to keep the city running. And considering Whele's long-term plans to take over the city, this isn't any good for Riesen's long-term future. But what's in the best interest of both of them is keeping the whole "Chosen One" thing under wraps so as not to stir up a religious fervor that could destabilize the city. Whele says that people who know about Alex's identity are being "spoken to," which is apparently code for "I'm feeding them to my lions." (Literally. There are lions.)

Whele certainly has an admirable flair for the dramatic... I only wish he were more creative about its application of it. In a post apocalyptic world where you basically control the former city of Las Vegas, the best thing you can think to do is hold psuedo-Roman gladiatorial matches and feed people you don't like to lions? Top marks for effort, Whele, but you get an F for creativity.