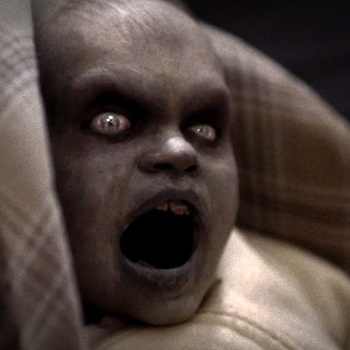 One twist that distinguishes Z Nation from say, The Last of Us, is that Murphy isn't a willing participant in this journey. As the opening scene reveals, Murphy is a convict who was forcefully experimented on by a desperate government, and wants nothing more to do with making a vaccine. It's hard not to feel a little sympathy for him after such a traumatic experience, but he certainly doesn't make it easy. For the rest of the episode, Murphy does nothing but complain, cower, and let other people fight to protect him, even though he's impossible to infect. In other words, Murphy is the most problematic member of the group, while simultaneously the one person everyone needs to keep alive.

But that's about as deep as Z Nation gets, at least for the first episode. Every other character is thrown at you so quickly that you don't really know much about them. Outside of two National Guardsmen who differ in their approach to mercy killings, and an NSA dispatcher turned radio-DJ, the most memorable trait about each survivor is what weapon they carry. This will probably be resolved as the series develops, but right now, it means survivors keep joining the group for no logical reason. At one point, the survivors are searching an overrun building and find a woman who was clearly kept prisoner by its previous occupants. She never explains why she was locked up. There's no reason to trust her at all. But she joins the group anyway, because the writers need some drama for later episodes.

Like I said though, Z Nation isn't really about the drama. It's about the classic Dawn of the Dead formula of giving survivors weapons and watching them fight an endless threat. Here we're off to a good start. The premiere gives us outposts being overrun by zombies, forest chases, airplanes falling from the sky, and more. We've got zombies being shot, stabbed, hit with a makeshift mace, and run over in trucks. There are action-packed scenes where survivors run from hordes, and tense moments where a lurker could be hiding around any corner. The makeup and special effects are fine, although not nearly as detailed as AMC's The Walking Dead has done; it's pretty obvious that a lot of the blood effects are computer-generated, for example. But in terms of watching some shlock-level entertainment, this is perfectly serviceable.

And of course, it wouldn't be The Asylum if a absolutely over-the-top scenario wasn't thrown in. With Z Nation, that role is filled by a zombie baby, the funniest and creepiest element of the entire episode. According to Z Nation lore, zombies are at their fastest after turning, and slow down to Romero-like speeds over time. So when the survivors encounter a newly-turned zombie infant, this thing becomes Z Nation's boss fight. It crawls across the floor at a ridiculous speed, takes cover under boxes and vehicles, and becomes a massive pain for the characters. It's admittedly a very eerie scene, especially as the baby cries. But it's also a surprisingly hilarious moment that makes me wonder how The Asylum will top it.

Z Nation isn't going to be a landmark television series, especially with all the zombie competition on the market. But in no way does that mean it can't entertain. If you enjoy zombie stories for the basic thrill of watching survivors fight an unbeatable horde, Z Nation could be worth a look. Just try not to take the show too seriously; it certainly won't.