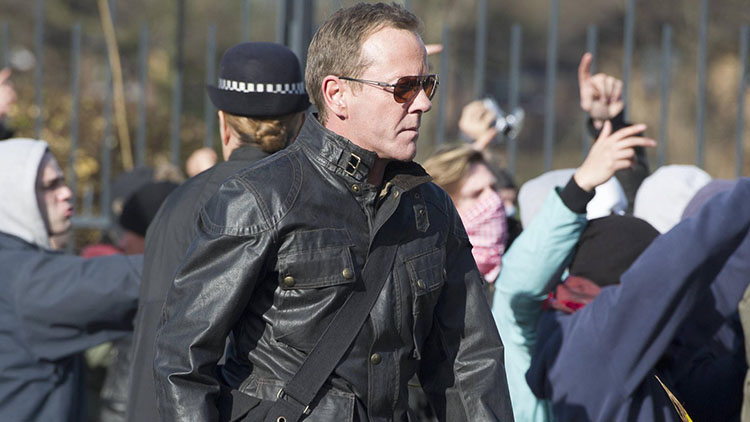 And so we come to the fourth hour of 24: Live Another Day's 12-hour mini season. Jack's in London trying to stop a group of svelte terrorists in the English countryside, lead by a woman called Margot Al-Harazi. She's cold as ice and really wants to kill some British civilians. Of course, no one believes Jack Bauer, who is burdened with the truth. This burden is the theme of the show, the most poignant commentary. With so much bureaucracy and personal agendas floating around the people who are supposed to make the toughest decisions for the greater good, why is it so hard to get any of them to see the truth? In a world of nonbelievers who thirst for their own power and money, the truth holder is burdened with invalidity and muteness. Jack Bauer does what he does for that metaphorical kid who sees the murderer running away from the crime scene and knows that if he tells his parents, he won't be believed. For those who know the truth but cannot speak it, Jack Bauer risks his life.

Back to the episode. We left Jack in the last episode as he caused a diversionary riot at the American embassy so he can get in, get to officer Tanner, who is being held on suspicion of killing his comrades with a drone that was actually hacked by Margot's terrorist cell, and get Tanner's Flight Key, which will absolve Tanner of any wrong doing and prove the technology to carry out the impending drone attack is legit.

Once inside the embassy, he only needs to choke out one dude and talk his way into the office where Tanner is being held. Bauer subdues another man, takes the Flight Key and tells Tanner that he believes him. Tanner in turn tells him everything he knows because when to truth holders meet each other, they must share their stories or remain invisible. Bauer takes leaves the office with the Flight Key with the intention of getting it back to Chloe, who can then upload it at not-Wikileaks and save the day.

Of course, things don't go as planned. Everyone and their mother now knows that Jack Bauer is in the American embassy. All the doors have been sealed, and Chloe can't find another way out. But, as luck would have it, Jack has another plan! There are computers all over the American embassy! Why not just upload everything there? Perfect. All he needs is an office. Tada. He finds one, takes three IT techs as hostage and begins the upload. While that starts, the Serbian guy he came to London with tells Chloe back at not-Wikileaks that he owes jack his life. It will be interesting to get that back-story. Chloe also states that she owes jack her life. The way Chloe repays him, and this is the crux of their relationship, is by being there for him in the tightest of situations. When he needs someone to walk through the fires of hell with him, Chloe's there to do it.

But, Chloe's boss has another plan in store of Jack. He stops the upload, presumably, and forces Jack to download an encryption program in order to get to the data. Well, that's just going to take to long, at least half an hour. Jack doesn't have half an hour. The Marines are crowding the door, waiting for the command from President Heller to take Jack out. Also, Kate and her partner have also talked with Tanner, whom Kate believes much to the chagrin of her partner, and are on their way to try to talk some sense into Jack Bauer. But, Jack has half an hour to get all this stuff done.

Related to:
philip harris24 live another daymovies and tvreview
0
Tweet