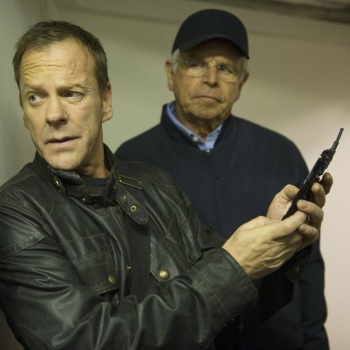 Meanwhile, Jordan, who Navarro shot at the end of the last episode, is still on the run. Do I smell a spinoff? Jordan could easily be a new Jack Bauer. Nothing like friendly fire from the CIA to put you on your own side, am I right, Jack? It's at this point that Jordan also forgets the theme of the episode. He calls Navarro claiming he's been shot. Jordan! The true nature of things may be staring you right in the face! Navarro sends his assassin and in one of the infinite London warehouses Jordan roughs him up, wanting to know why Navarro -- oh, now you've figured it out -- wants him dead. But before he can get an answer, he kills the assassin.

Well, it's almost time for President Heller's appointment with Margot Al-Harazi. He spends some time with his daughter, whom he doesn't tell of his situation, and leaves with Jack. After they leave, his daughter finds a letter her father has left her. She is found visibly upset by her husband, whom she realizes pretty fast knew about what's happening and what danger her father is walking into. Oh, Audrey, the true nature of things -- well, you get it now. Still worried about her father, she turns to her husband for reassurance, and in his only dignified move thus far, Mark tells her that her father is with someone he trusts. Finally, two of these characters finally find people they can trust.

Speaking of whom, Jack and the Prez make it to Wembley via a helicopter that is actually going the wrong way, but let's suspend disbelief for a moment. Once at the stadium, Heller tells Jack that he'll be pardoned of everything he did. Jack, always the rogue, doesn't want pardoning, but of course, he's not the president so the choice isn't his. Besides, it's President Heller's moral insurance should things go wrong on the pitch. Spoiler alert, they do. Margot asks her hot son Ian if the drones are ready. They are. She takes control of the drone herself and kills Heller on the spot. Did she take the controls so as to absolve her son of killing the President of the United States, or did she want to personally kill the man she so loathes? I'm guessing both. She's suddenly shown compassion in this episode, so it's hard to gauge her. Remember, she is letting her daughter die in an undisclosed place at the moment. But, yes, President Heller was killed, point blank.

So, what have we learned? In 24 land, the moment you get a little bit of peace, the moment you make honorable decisions and are surrounded by people whom you truly trust, and maybe love (even if it's just one) you die. The truth may be staring you in the face, but that doesn't mean it's going to be easy to learn or not kill you in the end.

And what of our dear Chloe? She had to leave not-Wikileaks because her boss Adrian (who is Navarro's puppeteer) was worried the CIA might find them. She has set up camp in a pub, which may be the only place to find any real truth in London, seeing how this season is going. Once Navarro tells Adrian that Jordan's been finally killed (a lie), Adrian calls Chloe and asks her to come back and work for him. She declines, choosing instead to stay with Jack. Let's just hope that her search for truth doesn't find her in the crosshairs of an assassin's rifle or a terrorist's drone. Not that she needs to worry about that now. Presently, she needs to focus on getting the data off the disk the feds found in the abandoned manor. The truth on that disk is less plain, but sure to be important.