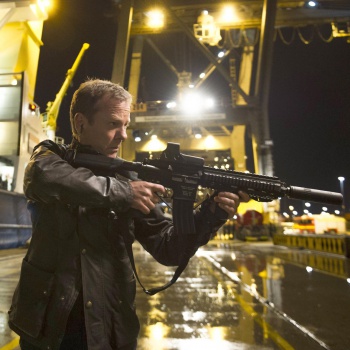 In the grande finale of Live Another Day Jack has to choose between Audrey and the rest of the world.

Well, friends, the end of another half-day has come. Yes, it took eleven weeks for that half-day to end, but therein lies the magic of television. In the real world, time flies when you're having fun, but in the figurative reality of television (or at least 24), a half-day of shoot-em-up antics can last almost three months. In this, the season finale of 24: Live Another Day, our hero Jack wins a showdown with his ultimate enemy, loses the love of his life, and the stage is set for even more possible 24 excitement in the future. Catch last night's and previous episodes on Fox.com or Hulu.

Last week's eleventh-hour episode ended with Cheng threatening to kill Audrey who stood in a park having just tried to negotiate a deal with the Chinese government. Remember, Cheng took control of an override device, making it look like America had attacked a Chinese warship. Audrey was trying to smooth that over. Well, things couldn't be wrinklier for her.

Meanwhile, Jack and Kate are still searching for evidence that will lead them to Cheng. Isn't it interesting that in each hour it looks like everything is about to fall apart and then within the first ten minutes of the next episode a solution presents itself and the day is saved? Surprise! That's exactly what happens here. In this, the writers were a tad lazy, but then again, without that, there'd be no show, so who am I to complain? That said, there must be about a billion hidden desk compartments in London alone, filled with top-secret data on covert affairs.

Having discovered this new information, which is a direct lead on where Cheng will soon be, it's time for Jack to put an end to all of this falderal. The only snag is Audrey. Cheng makes it very clear to Jack -- and anyone else within earshot of the speakerphone -- that if Cheng is followed, Audrey will be killed. With no other choice, Jack risks Audrey and sets out to find Cheng -- only a verified image of Cheng will stop China from retaliating for the strike on their carrier. Poor Jack, this entire series he's had to make these decisions. What does one choose when presented with saving someone you love or saving the world? I can only imagine it's how Beyoncé feels when she has to decide between going to a PTA meeting for Blue Ivy and going on a world tour.

Kate is put in charge of rescuing Audrey. I really feel like the show underused Kate -- she's a beautiful actress with what could have been a very interesting storyline, but they didn't really explore any of the nuances of her character like I'd hoped they would. The same goes for Jack's sidekick Belchek. A primo twist was missed in not utilizing his character. Of course, with all the other international mishegas taking up so much time, I understand. If they do another season next year, I hope both Kate and Belchek are a part of it and that we get to learn more about them.

Also you'll remember that last episode, Chloe was at the bottom of a ravine. She makes her way back to the road and calls Jack. They make up, and she's ready to start helping him find Cheng. I'm glad they got a chance to make up, and I'm glad that she's back on the good side. Those last two episodes where she was essentially Adrian's hostage were killing me. She needs to be helping Jack, full stop. As she says, they're best friends, and in the world they inhabit, friends like that are rare.