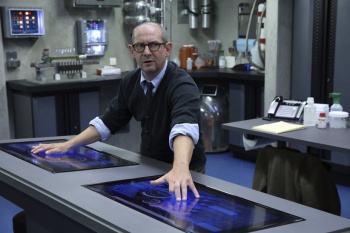 As the episode wraps, Skye decides she wants to fully commit to becoming a S.H.I.E.L.D. Agent and Agent May decides to re-activate herself as a combat-ready operative. Curiously, there's no final stamp put on FitzSimmons' affection for Dr. Hall, despite that being the original impetus (or part of it) to go after him in the first place. Instead, we get a stinger of a human-like hand emerging from the Gravitonium sphere just after it's locked up in a S.H.I.E.L.D. vault, so that anyone watching who has never heard of Graviton won't be confused when Hall shows up again toward the end of the season.

In "Eye Spy," the Agents will confront a rogue former S.H.I.E.L.D. agent (Pascale Armand) who is apparently a former trainee of Coulson's.