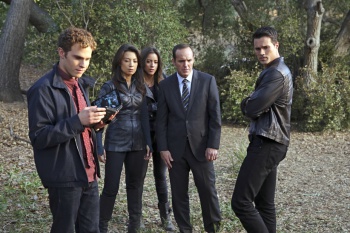 More or less defeated by the circumstances, The Agents are now tasked with transporting the Chitauri "souvenir" to yet another S.H.I.E.L.D spot for "disappearing" bad stuff, The Sandbox. Interestingly, the revelation that they're fighting a disease instead of a corporeal enemy seriously rattles Ward; leaving him feeling inadequate in defending his team from a problem he can't punch into submission...

...a problem that gets much more real when it turns out that Simmons has managed to contract the virus (which is spread via static electricity.) And so we come, belatedly, to the main drama of the episode: Simmons is quarantined in her lab to try and work out a cure (which had been the plan to begin with) in the two hours she has before her brain electrifies and Coulson is under orders to "dump any infected" over the open-ocean - something he's not prepared to do.

The situation effects the team in the expected ways: Coulson wants results, May is ready to do whatever's necessary, Ward is angry, Skye is emotional and Fitz is a total wreck. In a last ditch effort (after a mini-blowup where we learn that Simmons was the one who wanted them to join S.H.I.E.L.D), he slips into the quarantined lab with the helmet so they can try to synthesize an antidote directly. When their final attempt at such seems to fail, Simmons tries to knock Fitz unconscious so he won't stop her from throwing herself out of the plane to save everyone else.

Unfortunately, she does so just as Fitz has realized that the cure works after all, it just takes awhile. Oops! Fortunately, Agent Ward is onhand to grab a parachute and sky-dive after her for a mid-air rescue, the impressive visual-effects of which probably explain why the rest of this episode took place mostly on the plane.

With order effectively restored, things wrap up with a quiet scene between Coulson and May, who seem to be inching toward a quasi-romantic relationship based exclusively on the premise that it's funny when the two characters whose schtick is to not show facial expression or change in voice-tone "flirt." In this case, though, he has some confiding to do: He ordered those medical test on himself. Apparently, the person most acutely aware that something isn't right with Phil... is Phil.

There isn't a lot of mythology to dissect in this one, honestly. At least, not much in the way of new mythology that hasn't already been run-down in the previous recaps.

It's interesting to see Skye take a back seat to what turns out to be a Fitz/Simmons-centric adventure. For this series to work long-term, it can't only be about her fish out of water perspective on situations - especially once she stops being the "new" kid.

Unless I'm mistaken, this is the first time we've heard Simmons' first name. It's Jemma.

Ward and Simmons have a moment toward the end that feels a lot like temperature taking for more inter-team relationship games. So... a love rectangle, maybe?

Not featured in this episode, but newsworthy: Saffron Burrows will be joining the cast in a yet-unspecified scope as Agent Victoria Hand, a character of more recent vintage from the comics whose alignment frequently shifted from good to "evil-adjacent" as she butted heads with Nick Fury (amusingly, Burrows co-starred with Samuel L. Jackson in as Deep Blue Sea. In the comics, Hand is a lesbian, and if that detail is preserved in transition it would make her the first openly-gay character in the Marvel Cinematic Universe. For what it's worth, in 2006 The Independent named Burrows The 90th Most Powerful Gay Person in The UK (she had recently come out as bisexual.)

Ward and Fitz get sent off into field-duty that quickly turns deadly in "The Hub," which will also introduce an even more super-secret "Level 8" echelon of S.H.I.E.L.D and feature the return of Maximiliano Hernandez as Agent Sitwell, who previous appeared in Thor and two of the One-Shots.