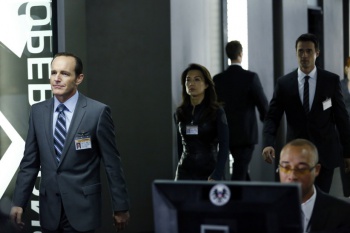 Yeah, that's this week's scenario: Team Sexy and Team Nerdy buddy-swapping for parallel adventures. It's a cute but pretty obvious setup, with the expected cute but obvious payoffs: Fitz is annoying but resourceful (he saves Ward and himself from Russian bar thugs by fixing their TVs - which he himself disabled with an EMP charge) while Ward is a stony jerk but not incapable of sympathy, Skye is impulsive but determined while Simmons is nervous but brave, you get the idea. Picture them in their respective adventures (Ward/Fitz have to break into a compound and disable a weapon, Skye/Simmons have to hack The Hub's database) and you could probably write the scenes out yourself.

But that's basically okay, because this one isn't about the MacGuffin of The Week, it's about character pair-offs that haven't really been seen yet getting some alone time to hash things out and deepen their characterizations. Sample bit: Ward intuits (probably not without reason) that Fitz is over-eager to prove himself as a field agent because it was Ward who saved Simmons' life in the previous episode instead of him. Simmons and Skye, on the other hand don't have nearly as much to chat about: The Simmons Show was last week, anyway, and their complication is whether Skye can hack the Secret Info without being tempted away by potential access to those files she's been looking for.

"Secret Info" turns out to be that Fitz and Ward were lied to about there being a team waiting to extract them after their mission: Once the weapon is down, they'll have to fend for themselves while S.H.I.E.L.D is bombing the crap out of the place. Coulson reads her the riot act for... well, doing the stuff she's been doing since the first episode; but then he heads off to read a longer, louder riot act to Hand - evidently he was lied to on this one as well. Long story short: The team is back on the same page in time to rescue Ward and Fitz themselves (fun new thing: The Bus can hover like a giant Harrier. Probably makes no physical sense, but it looks cool.)

Back on the plane, we get not one, not two, but three mystery-tease wrap-up scenes:

First? Coulson tells Sky he found and decrypted her file: It's not specifically about her, but rather about the person who left her at the orphanage as a baby. Name? Unknown, but she was a woman... and a S.H.I.E.L.D. Agent. Second? Not so fast: May, chilling out in Coulson's office, asks if he told Skye the whole truth. He did not - partially because he wants May and him to suss out the complete story whether S.H.I.E.L.D. wants it known or not. In May's hands we briefly see what appears to be some of the truth being withheld from Skye: A crime scene photo of a young woman, dead, face-down in a pool of blood. Finally? Now alone, Coulson makes a call "upstairs" to access information which we're to understand is probably the full report on his near-death and resurrection... only to be shocked when informed that said info is actually classified above his level; something the audience has known since the pilot but is news to him.

And so, in the margins of what would otherwise be a pretty average episode, Agents Of S.H.I.E.L.D. makes a canny, dramatic shift in theme: After 7 episodes of The Agents methodically winning Skye over to the side of "espionage and secret-keeping are for your protection," now even quintessential company-man Coulson is feeling like maybe the rest of S.H.I.E.L.D. isn't to be trusted. Couple that with the fact that the series will be wrapping its first season in-tandem with Captain America: The Winter Soldier - where at least a portion of the plot appears to involve S.H.I.E.L.D. becoming something more like villains - and it suddenly makes a lot more sense why our focus has been on a rogue sub-team rather than the bigger Agency.