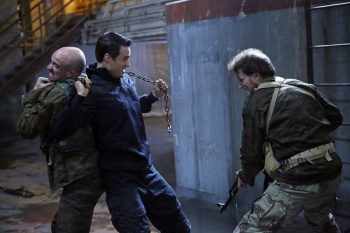 The quote at the top is from Skye, referencing Coulson's behavior while under Hand's orders at The Hub. I'd be curious to know is foreshadowing like that doesn't read as ham-handed to non-fans who haven't been assuming he was coming back as an LMD since before the credits rolled on The Avengers.

It's kind of disappointing that the whole point of this episode was to establish what the relationships between Ward/Fitz and Skye/Simmons are and the pairings don't really pan out to be that interesting. In reality, that's how it works - not everyone becomes pals with their coworkers - but on TV you'd think someone in the writer's room would've said "Can we at least find out Simmons and Skye both always thought Heathcliff was better than Garfield or something?"

Best scene: Coulson's conversation with May, which is actually a conversation with himself while May feigns ignoring him during Tai-Chi exercises. Funny stuff, but eventually they need to find at least one Asian Lady stock-stereotype for her to not fit into. Ming Na-Wen plays it to the hilt, but they can do better than this.

There cannot be enough room on that plane for Simmons' evidently thousands-strong wardrobe of "adorkable" sweater-vests. Producers? Just get the obligatory "Whoa! We'd never have guessed Simmons would clean-up so good for this undercover mission at the fancy dress ball!" episode out of the way, and don't act like you're not going to do one.

I doubt it's an accident that Coulson very likely starting to move against his superiors comes up in the same episode introducing Victoria Hand, who in the comics was best known for becoming the right-hand woman of Norman "Green Goblin" Osborn when he took over S.H.I.E.L.D and rebranded it as H.A.M.M.E.R. If she becomes a "heavy" for the series, I wonder if they were at any point intending that role for Colbie Smulder's Maria Hill, who was running a different "bad S.H.I.E.L.D" incarnation during the Civil War event.

So. The bizarrely prominent fan-theory that Skye would turn out to be Coulson and May's lovechild can apparently be discarded. At least for now, we're to assume that her mother was a S.H.I.E.L.D Agent who was killed not long after leaving her to the orphanage. Was she a good guy? A traitor? Killed by enemies? Taken out by S.H.I.E.L.D? The most "classically Marvel" answer would be that mom was a good-but-compromised Agent while dad is a still-active supervillain of some repute. At this point, still too vague to guess. On the other hand...

CRAZY FAN-THEORY OF THE WEEK:

I will pass a solid gold brick if Skye is actually somehow SINTHEA SCHMIDT.

Big movie tie-in doings in the offing in The Well, as The Agents encounter dangerous otherworldly objects somehow scattered on Earth after the events of Thor: The Dark World.