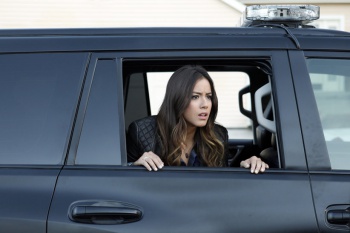 In any case, Skye is suddenly curious about May's background because she's upset at the tactics used to corral Hannah; who's now in The Bus's superhuman holding-cell being questioned by Coulson and May. According to her, she doesn't think she has any powers, telekinetic or otherwise: a devout Christian, Hannah believes that God has abandoned her for failing to prevent the explosion and that the strange occurances surrounding her are the work of demons that can now stalk her freely. The Agents don't buy it (evidently "Mephisto" isn't a known threat in this universe yet), but right on cue a ghostly figure can be seen lurking in the background. Not long after, "something" knocks a paperweight of Coulson's desk.

Simmons uses S.H.I.E.L.D's all-purpose hologram-analyzer gadget to recreate the original accelerator explosion and finds something strange inside the blast: A flash-image of a bizarre alien landscape. But before she can finish exclaiming that the machine "opened a portal...," than does a hulking ghost-figure materialize behind her and finish the sentence with "...TO HELL!" before smashing the hologram generator with a wrench and blinking into nothingness again.

Short version: Whoever was running the lab (the signs said "STATICORP," which doesn't appear to have an origin in the Marvel comics or movies) was using the particle-accelerator in an attempt to recreate the dimensional-portals seen in Thor: The Dark World. Tobias Ford, a worker at the facility who'd been cited for making excessive incident reports to Hannah, was somehow caught in the explosion and is now stuck between our world and wherever the portal opened to (technically, since this is the Marvel Universe, it could actually be Hell.) The shifting back and forth while stalking Hannah is gradually scrubbing him out of existence, but he's still tangible enough to wreck up The Bus's power supply and force a near crash-landing and trap everyone onboard in near-total darkness for an extended slasher-movie chase sequence.

Amidst all this, Skye finally gets the truth about May from Coulson: He, a group of Agents and civilians were trapped in the compound of an unnamed "Gifted Individual" who had followers worshipping him like a god, and May took it upon herself to rescue everyone by (apparently) killing the leader and his cult - an experience which Coulson believes transformed her from a friendly, fun-loving, rule-breaking Agent to the icy hardcase she is now.

Ever timely, we cut to May dragging Hannah out of The Bus and into a nearby barn to use her as bait for Tobias, who shows up for a human/ghost fight scene exactly sluggish enough for Skye to figure out the missing piece of the puzzle: Tobias is mentally-challenged, had a crush on Hannah, set-off the explosion while trying to stage an accident that would get her attention and has been causing the incidents around her out of a misguided protective instinct. He really does think the alternate dimension is Hell, and that he needs Hannah to forgive him to escape damnation. Ultimately, she talks him down and he appears to dissolve into nothingness.

Back on the plane, Coulson explains to Skye that her empathy and uncanny skill for reading people are among the newest batch of vague reasons why he brought her onto the team. Case in point: She's already sussed-out that Coulson similarly tapped May for the team as an attempt to get her to come back out of her shell. Someone pulls the shaving-cream wakeup prank on Fitz, that someone heavily implied to be a (maybe) loosening-up May.