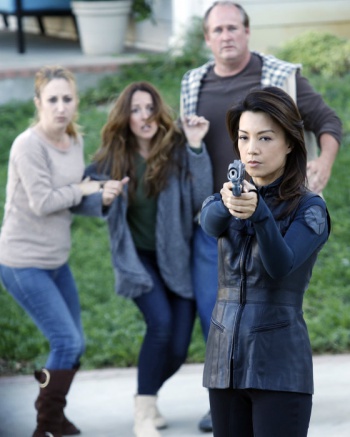 This is the epitome of a filler episode, which is kind of frustrating considering the toolbox at this series' disposal. There's nothing inherently wrong with using "let's fight a random mook villain" as pretext to ladle out May's origin, but while I'm not in the camp that says the problem with Agents of S.H.I.E.L.D. is that it's not packed to the gills with Marvel cameos, Tobias Ford's role in this is exactly why supervillain D-listers exist in the first place.

Either way, even a more interesting villain-of-the-week couldn't fix the main problem: A clumsy, meandering script. The prank thing is transparently only there as an excuse to turn May's backstory into an episode-length mystery, and there are no visual flashbacks to the actual event to offer any kind of broader context or questions of interpretation - Skye hears another version from Ward, how funny might it have been to show his version rendering May in a more, well... "romanticized" light than Fitz/Simmons' in light of their relationship?

Speaking of which, while I maintain it could still be misdirection (even with all the implications, we haven't seen them kiss or even so much as embrace) the idea of this being the show's inaugural romantic angle is pretty damn cool. Partially because it's a nice surprise given how heavily Ward/Skye was being teased, but also because it highlights how absurd it is that this should be a surprise in the first place: Character-wise, Ward and May are the most logical pairing imaginable (same disposition, similar history, shared interests/issues) ...save that Ming Na-Wen is old enough to be Brett Dalton's mother and older-woman/younger-man relationships are virtually nonexistent outside of punchlines in movies and on TV.

On the other hand, it's possible that Ward/May are sleeping together but are not romantically involved. Their initial bonding was over having both been afflicted by the Berserker Staff in The Well, which we were told takes its sweet time cycling out of one's system. Maybe they worked-out that clandestine sex was the most efficient way for them to release all that energy and amped-up strength - since they're both able to give as good as they get?

CRAZY FANBOY THEORY OF THE WEEK:

So. Melinda May is the way she is because she went through some unspecified hell taking down some unspecified superhuman with a cultish following. That sounds like something that'll come up again... so who was it she fought and (supposedly) killed?

Somebody I'd like to see who'd fit the bill: "The Leader", aka Samuel Sterns - Tim Blake Nelson's character from The Incredible Hulk. The Leader has psychic powers, which could conceivably make him the mysterious "Clairvoyant" whose existence was teased back in The Girl in The Flower Dress.

A less-likely candidate: An as of yet unknown Marvel Movieverse version of Erik Lensher, aka Magneto. See, it's finally been (officially) confirmed that the sibling duo Quicksilver and Scarlet Witch will be joining The Avengers for their next adventure; and a lot of their traditional dynamic involves being the children of a villain. In the comics that's Magneto, but X-Men characters cannot be part of the Avengers movies for contract reasons - introducing a new mastermind-type guy on this show and making the pair his children instead would be one way to preserve that dynamic without having to waste script-pages in the movie.

Agents Of S.H.I.E.L.D is taking another week off, but then it'll be back with The Bridge; which will feature the return of the mysterious "Centipede" villains and the drafting of Mike Petersen (the scientifically-enhanced superhero from the pilot episode) as a new Agent.