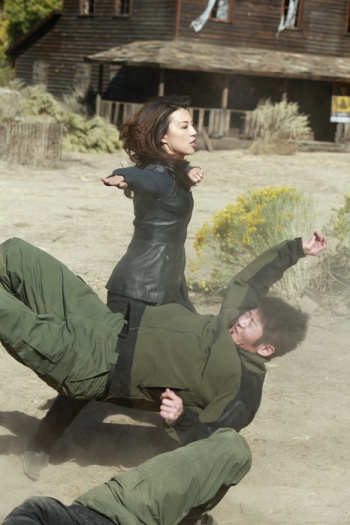 Surprising nobody except her secret booty-call Ward, really, May turns out to also be rooting for Skye and voting her off The Bus was a bid to give her an out to go find Coulson with her super hacker-powers. (The Agents' faith in Skye's ability to do something meaningful is more believable when you consider that in their universe there's no Agents of S.H.I.E.L.D. in which to watch her do the opposite of that week after week.) Unfortunately for Skye, Agent Hand's orders have made her internet-blocking bracelet thingee so sensitive she can't so much as Google anything Agency-related without S.H.I.E.L.D. shutting down an entire internet café. Which means Skye will now have to find a way to hack... real life.

No, seriously - that's her big "fight or flight" development this time: Doing Nancy Drew detective work to run down leads about Coulson, but while muttering "hacker-speak" terminology sort-of related to what she's doing; i.e. "C'mon Skye, find an exploit!" = "C'mon, Skye, find a way to break into a rich guy's house and make him log into his Swiss Bank account so you can talk him through cracking open CENTIPEDE's financials from there." This is just on the razor's edge of too dumb to still be endearing, but for some reason Skye decides to cosplay as Agent May while doing all this and Chloe Bennett's Ming Na-Wen impression is so goofy I couldn't not smile.

Since Po's torture-method is getting nowhere fast with Coulson, The Clairvoyant offs him with some kind of remote-delivered poison (that looks suspiciously similar to Obadiah Stane's paralytic from the first Iron Man) and puts Raina in charge. She's got a softer touch (because girl, y'see) and hits Coulson with moral quandary: Since The Clairvoyant already knows everything else about S.H.I.E.L.D and the only thing he wants to know is something Coulson also wants to know, what's the harm? Especially since S.H.I.E.L.D has been lying to him about it. That makes... complete sense, actually, so Coulson takes a ride on the brain-box and discovers all that nifty stuff I mentioned at the beginning. Maybe more importantly, we find out that Raina works for The Clairvoyant because the machine helped her recover a missing memory.

Elsewhere, Skye's life-hacking pays off and she locates the plot of land where Coulson is likely being held. Hand and the heavily-armed, useful-looking S.H.I.E.L.D guys go off to raid other CENTIPEDE outposts, while the series regulars reunite to get into a not-great fistfight with some mooks and an Extremis merc (CENTIPEDE apparently always travels with exactly not-enough of these guys) to ultimately capture Raina and rescue Coulson. Back up on The Bus, Hand takes her leave, everybody makes nice and Coulson deactivates Skye's restriction-bracelet. Oh, and in a detail that encapsulates Agents of S.H.I.E.L.D's TV-budget woes in an amusing nutshell, we're told that while the low-tech rescue op was going down, S.H.I.E.L.D-proper has effectively crushed CENTIPEDE's (visible) operations worldwide. Tidy!

For a modicum of closure, Coulson drops in on the head surgeon from the final wave of his rebirthing process (wherein we saw a machine that appeared to be manually re-shuffling his exposed brain - great image!) and learns that yes, it was Nick Fury who ordered the whole thing... and everybody else involved was pretty squicked-out about it. In our final tease (spoiled by the opening credits' cast-roll), we learn that Mike Peterson survived the explosion... sort of. He's badly burned, missing a leg, stuck in a dungeon-like recovery room and he's been implanted with one of those instruction-delivery eyeball devices. So... so much for CENTIPEDE being done for.