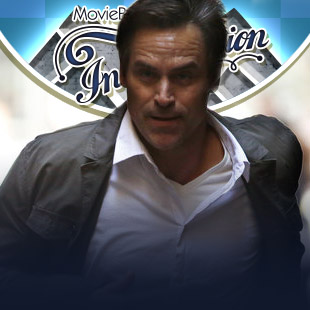 AGENT COULSON: "I'm tired of secrets. So I'm glad we're here. It's time to root out all the secrets."

AGENT MAY: (pause) "Agent Ward and I have been having se..."

And so we return to Marvel's Agents of S.H.I.E.L.D, a series which - if you're coming in with no other context - is about Jennifer Grey's husband as the proprietor of a swank party-plane which he fills with attractive college-aged interns so they can fly around having vague conversations about a series of popular action movies.

Last week's episode could charitably be called a letdown, capping off the mystery of how Agent Coulson came back from the dead between The Avengers and here with a reveal that landed as more of a "Huh." Than a "Whoa!" - he was actually dead several days, Frankenstein'd back to life with strange and painful super-science and implanted with fake memories so he wouldn't remember that his first post-rebirth thoughts were that he'd rather remain dead. Interesting enough in that it solves one mystery with another (why would Nick Fury go to such extreme lengths to resurrect Coulson?), but not the Earth-shaker that casual audiences were promised and didn't tie-in to any Marvel Universe obscura like fans had been hoping for. Apart from that, said reveal happened in the context of an otherwise forgettable, low-tech episode.

So, of course, the logical follow-up to that is for the next week's episode to be probably the best one (certainly the most impressive-looking) thus far, featuring lots of interesting worldbuilding, character development, copious Marvel Universe connections including a known supervillain and a genuine bombshell reveal that changes a major character's entire backstory... all jammed into an episode not nearly as hyped as the last one and landing before another two-week re-run break.

...Dang it, "AGENTS OF S.H.I.E.L.D;" are you trying to be another Whedonverse one-season-wonder?

Anyway. Seeds opens with a group of college students sneaking into a gymnasium swimming pool after dark. Something strange happens to the water, causing it to flash-freeze and trap a male student named Seth by the leg. He's freed by another student who'd been hanging out nearby named Donnie Gill - and if you're a Marvel Comics fan, chances are that name spoils the rest of this story. Seth dons a jacket to warm up, and its logo reveals that this is no ordinary college - this is S.H.I.E.L.D Academy.

Up on The Bus (Team Coulson's private jet, seemingly named so that there would be an excuse to call their minivan "The Shortbus,") Skye, as the only Agent onhand pulled directly from civilian life, does her audience-surrogate duty getting filled in on The Academy. Apparently, S.H.I.E.L.D maintains three separate schools for science, information and operations (read: butt-kicking) specialists, and rivalries between the three often carry over in the field agent hierarchy. I'm already set to once again observe that this show keeps talking about tangential stuff that sounds more interesting than what actually happens onscreen...

...but no! Turns out this is the milieu Skye, Fitz/Simmons, and Ward will be jumping into to investigate the freezing-pool event, because it happened at the Science School where Fitz/Simmons are considered hometown heroes. Coulson and May aren't coming, though. Having the leader and the top ass-kicker onhand would solve the mystery too quickly, after all, and besides they have to go to Mexico for some secret reason.

At The Academy, Fitz/Simmons head off to deliver a "With Great Power..." speech about super-science gone wrong to the worried science students, while Ward takes Skye to visit the "Wall of Valor," a memorial where S.H.I.E.L.D inscribes the names of Agents killed in the line duty - which actually looks a little small considering the way background Agents got tossed around in the opening of The Avengers alone. She takes note of the name Bucky Barnes, confirming that Captain America's teammates are also well known by reputation and marking Agents of S.H.I.E.L.D.'s official mission-pivot from "remind people of The Avengers" to "start building up to Captain America: The Winter Soldier. Elsewhere, Ian Quinn, the evil CENTIPEDE-affiliated venture capitalist from Episode 3: The Asset, does some foreshadowing from his limo.