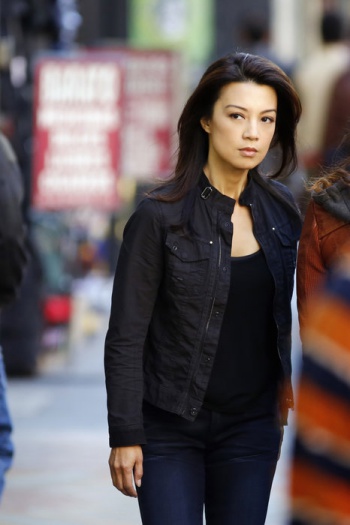 Speaking of mission-pivots, now that "How is Phil alive?" has been mostly answered, it's time for "Who is Skye, really?" to slide into the top mystery slot, and that's why Coulson and May are in Mexico. In case you forgot: Skye is an orphan who became an anti-S.H.I.E.L.D hacker because she found out The Agency had redacted information about her real family. Earlier in the season, it was discovered that she was left at an orphanage as a baby by a female Agent named Avery, but Coulson kept the darker part of the story - Avery was later killed under mysterious circumstances - between just him and May. Now, Avery's long-missing former partner Agent Lumley has been spotted in Mexico, and they're tracking him down for answers. The exchange about secrets at the beginning of the recap? That's part of their "stakeout banter."

Back at The Academy, Fitz/Simmons' ethics lecture (which namechecks HYDRA, A.I.M. and CENTIPEDE - seemingly confirming that in the Marvel Cinematic Universe at-present they're thought of as separate entities) is interrupted when a second freeze-bomb goes off, momentarily encasing Donnie Gill in ice. He's rescued by Fitz, who's sent to look in on the kid at his dorm room while Ward and The Ladies go fishing for clues at a secret Science School underground hangout, "The Boiler Room," and the audience does it's best to play along and pretend not to have already figured out that Donnie (a 190-I.Q. lonely-genius with zero social skills) is the bad guy and froze himself as a distraction.

Down Mexico way, Agent Lumley is spotted and quickly snapped-up by the combined efforts of May's fighting skills and Coulson's flying car, Lola. Once he learns his captors are S.H.I.E.L.D and not... whoever he's been hiding from, he's more than happy to tell them about "The baby girl."

...wait. Wait a second. We're not gonna drag this out for the rest of the year? We're going to get the truth about Skye's origin now? Right up front??

Yup! 20 years ago, Lumley and Avery were sent to collect an 0-8-4 - S.H.I.E.L.D code for powerful objects of unidentified origin - from a village in China that had been slaughtered trying to protect it. Said object? A baby believed to possess unidentified super-powers. Skye is an undocumented superhuman (of still unknown parentage), and the childhood of constantly-changing foster homes she'd believed was evidence of being chronically-unloved were in fact an elaborate master-plan by associates of Agents Avery and Lumley designed to protect her from unnamed forces that were after her and killing anyone who got in the way. Upon this reveal, Coulson elects to let Lumley slip back into the shadows rather than return him to S.H.I.E.L.D-proper, effectively joining the Protect Skye Club himself.

Back at The Academy, the Boiler Room trio work out that Donnie did the freezing himself, but not fast enough to warn Fitz before he opts to bond with the troubled youth by helping him fix an invention... that turns out to be part of a supersized freeze-bomb. Oh, and he gets knocked-out by Seth, whose been in on the scheme with Donnie the whole time. In fact, they staged the attacks specifically to trick Fitz/Simmons into coming and then into helping them finish the device. It's probably best not to try and work out how many coincidences and variables that plan is hinging on, I think.

Why build a giant freeze-bomb? Seth's father is an associate of Ian Quinn, who wants to buy it from them - but not before they run a field-test that goes haywhire and by some logic whips up an instant hurricane directly over S.H.I.E.L.D Academy. Once Fitz is back with the others (and Coulson has a heart-to-heart with Skye as part of his new "no more secrets" policy) it's time to vertical-land The Bus in the eye of the storm to rescue the two hapless/manipulated science brats; who've both just been knocked on their asses by the freeze-bomb exploding when they tried to shut it off. The effects, staging and music here are all yards ahead of the show's typically lower-tech limitations, but it doesn't hurt that the "There's been a superhero among us all along" reveal infuses residual urgency to the rest of the episode.